“We’ve already tried to tell them that.”

“There’s no way the execs will greenlight it.”

When I am asked to advise a company, the leaders have been working on that specific problem for a while. A long while. Typically, my team and I were brought in after they have hired a McKinsey or a Bain and done a multi-million dollar project. Before that, they would have tried (and failed) with different internal projects. By the time I am talking to them, they think they’ve exhausted all their options. They are frustrated, simmering anger at the situation.

And, so you’d think they’d be enthusiastic or relieved when we arrive at a potential solution.

But nearly always, they will say something to the effect of “no way will that fly”. And then defensively add, “we’ve already tried that.”

Ok, I’ll ask, show me. Show me what you’ve already proposed and we can do a gap analysis between that proposal and this direction. And that’s when they stop. They splutter. They defend.

There was no proposal, you see. No specific thing documented. Just the “knowledge” that this proposed solution or answer would never fly. The reasons varied. That an exec cared more about protecting today’s revenue than investing in the future. That a certain golden-hair boy in the exec team thought this idea wasn’t worth the merit. The reasons seemed perfectly plausible. And so I never questioned that.

What I questioned was whether we had done our part. Let’s do the proposal. Let’s write up what we think. Let’s be clear about our own ideas. And, then, if they turn us down, they’ll turn us down. That’ll be the way they’ll show us who they are. But, first, I’d argue, we have to show up to our own idea. To show us who we are.

Just recently someone asked me if I had pitched the notion of Onlyness to the main TED stage organizers. After all, I’m a known entity to them and this idea of Onlyness has already been identified as one that could reshape the canon of innovation. And I said no, I hadn’t. Instead, I had done a talk at a TEDx, going where I was invited. It would simply hurt too much to know that these editors and curators whom I respect would at what I propose and pass. And my friend shook her head. You could almost hear her internal voice: GIIIIIRL. And then she said, you aren’t believing enough in yourself. Maybe, I thought. But I also know how much it hurts to be in settings where I do show up and get shot down. And there’s only so much rejection and uphill battles a person can take. Of course, I know that allies could submit these ideas for the main TED stage. I know I don’t need to be the ‘only one’ advocating for an idea that can center so many new people and thus gain new ideas.

But my friend kept pushing me to decode the choice.

And it was the same as those executives I’ve worked with on change. We’d rather be afraid of being rejected than do all the work to show up and actually be rejected.

It’s why 61% of us cover at work. It’s not that we don’t understand we’re covering, and thus hiding the source of our original ideas. It’s that we don’t trust those around us to accept us as we are. We’d rather hide than learn that the people around us don’t want to see our full selves.

But here’s the thing. When we make the choice to silence ourselves, we’ve made it easy to ignore us, our ideas, our fullness.

When we stop ourselves from saying that opinion only we might have, they don’t need to dismiss us since we’ve already done their work. If we hide our true selves from our colleagues, we’re denying them the opportunity to get over their own discomfort and celebrate your onlyness. If we don’t pitch the idea we think matters because we fret they’ll hate it, we’re ALSO not giving them a chance to pick that idea.

This is how we make progress. By showing up. By giving them a chance to say “no” (or “yes”).

Once you do your part, then we can see what happens next.

Name one way in which you’re holding back out of fear of others will think and then act to do YOUR part. And if you’re willing to be so open/vulnerable, post about the experience here on Yes & Know. Of what you’re thinking of doing. Why you’re afraid maybe. Or what you’re afraid of. And let’s work through this together.

This article was first published on Nilofer’s own website. 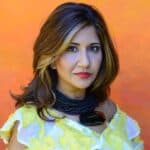