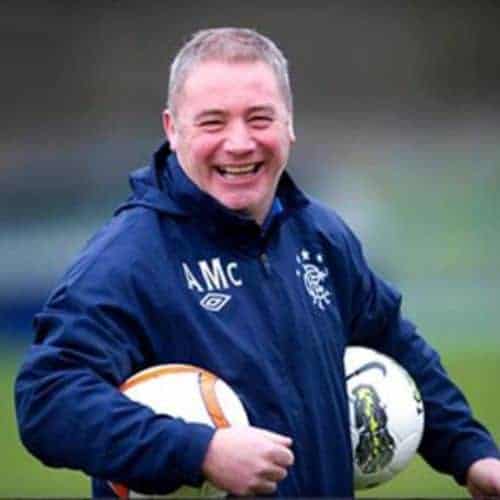 Ally McCoist is a Rangers legend who became the club’s record goalscorer, netting 355 goals. He holds the Rangers records for number of league goals scored, number of Scottish League Cup goals scored and the most goals scored by a player in European competitions. McCoist now manages the side he supported as a boy and has been in the hot-seat since May 2011.

Perhaps Scotland’s most renowned footballer, Ally McCoist has experienced extremely prosperous careers as both a player and manager. Outside of the game, Ally McCoist has developed a phenomenal reputation as TV quiz show captain on Question of Sport and a highly entertaining and sought-after football speaker.

Beginning his playing career at St. Johnstone before moving to Sunderland, Ally immediately impressed managers with his confident style of play as a striker, a personality trait that glows through his nature in all walks of life.

An energetic and enthusiastic personality at events, Ally is sure to be a hit with guests and provide a hugely entertaining talk as a football speaker.

Returning to Scotland two years after joining Sunderland, Ally signed for Rangers, a move that over time would see him become the club’s record goal-scorer with 355 goals. Ally also holds numerous other records for the club, including number of league goals scored, number of Scottish League Cup goals scored and most goals scored in European competitions for two continuous seasons, the first time any player had achieved the feat. A player who truly attained peak performance, Ally describes what is needed to achieve greatness in any field as a sports speaker, providing a range of compelling ideas for audiences to contemplate.

Inducted into the Scottish Sports Hall of Fame in 2007, McCoist is one of the nation’s most celebrated football players. A proud Scotsman, Ally also featured heavily in Scottish international football during his career, gaining 61 caps and scoring 19 goals in the process.

Returning to Rangers in 2007, six years after his retirement as a player, Ally became assistant manager at the club under Walter Smith. By 2011, McCoist had taken charge of the side and displayed extraordinary leadership strategies that guided the side to challenge in all competitions.

Unfortunately, during the 2012-13 season Rangers went into liquidation. Placed in the Scottish Third Division due to their position, Rangers and McCoist began the herculean task of rejuvenating his club back to prominence. Ally’s relentless drive and determination to overcome this adversity proved to be inspirational, leading Rangers to an unbeaten season in the Scottish League One championship just one season later. Covering topics such as leadership and teamwork and their importance to success as a football speaker, Ally will ensure that his lessons learnt from a life in sport can be translated for success in both business and life.

A wonderful after dinner speaker, Ally’s passion for the sport ensures that guests become a part of his world as he recounts anecdotal tales from his times both on the pitch and from the sidelines. One of the most demanded personalities on the after-dinner speaker circuit, Ally’s time on BBC’s A Question of Sport that spanned over 10 years revealing his innately sincere and jovial character, led to his recognition as one of the most acknowledged sports personalities. Along with various punditry endeavours that showcased his passion for football and his extensive analytical knowledge, Ally’s vivacious character coupled with the footballing experiences and insights he gained in over 3 decades in football make him an extraordinary football speaker.

A career that consisted of huge personal success both on and off the field along with sharing a changing room with the likes of Paul Gascoigne, Brian Laudrap and Terry Butcher, McCoist is sure to provide an extraordinarily entertaining yet thoroughly insightful event.