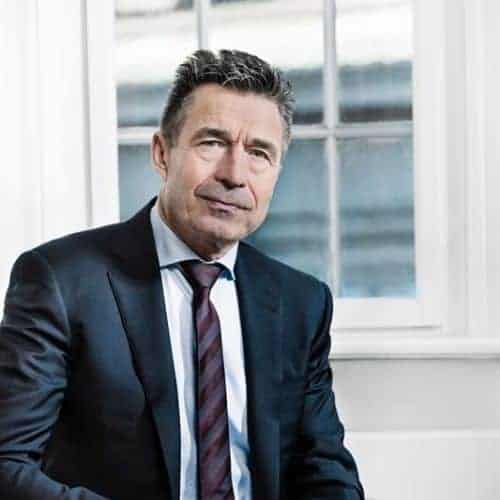 Anders Fogh Rasmussen has been at the centre of European and global politics for over three decades as a leading Danish parliamentarian, Danish Minister of Economic Affairs, Prime Minister of Denmark and, last but not least, as Secretary General of NATO. Upon leaving NATO, Mr. Rasmussen founded his strategic advisory firm “Rasmussen Global”, which provides geopolitical and strategic consulting services. He is also the Chairman of the Alliance of Democracies Foundation, a non-profit organisation for the advancement of democracy and free markets across the globe.

Mr. Rasmussen has been at the centre of European and global politics for three decades as Secretary General of NATO, Prime Minister of Denmark, Danish Minister of Economic Affairs, and a leading Danish parliamentarian.

Already in 1978, at the age of 25, Mr. Rasmussen won his seat as then youngest Member of the Danish Parliament. In 1987, Mr. Rasmussen took his first governmental role as Minister for Taxation and later for Economic Affairs, where he led the Danish negotiations for the Economic and Monetary Union in the EU.

After his Danish Liberal Party came in opposition in 1993, Mr. Rasmussen led the Danish political opposition and won the Chairmanship of his party in 1998. In the next parliamentary elections in 2001, he led his party to a landslide victory, which made it the biggest party in the Danish parliament, a position held by the Social Democrats since the 1920s. He formed his first government, and became Prime Minister of a coalition consisting of the Liberal Party and the Conservative People’s Party.

During his tenure as Prime Minister, he overhauled the tax and pension systems to ensure a historic increase in the labour supply to sustain the growing Danish economy. Meanwhile, his government put education, research and innovation on the agenda to prepare Denmark for the challenges of globalization. A strong advocate for the rules-based international order and universal liberal values, Mr. Rasmussen placed Denmark on the world stage by engaging in international missions for the promotion of democracy and the fight against terrorism. His government was re-elected in 2005 and 2007 respectively, and he held the position as Prime Minister until he was elected as future NATO Secretary General in April 2009.

Anders Fogh Rasmussen held his position as the North Atlantic Treaty Organization’s 12th Secretary General until 30 September 2014. During this time, he oversaw the Alliance’s operational peak with six operations on three continents including Afghanistan, Kosovo and Libya, as well as counter-piracy along the Somali coast, a training mission in Iraq and a counter-terrorism operation in the Mediterranean.

Mr. Rasmussen’s tenure at NATO marked a fundamental transformation of the Alliance. He developed a new Strategic Concept, which has set the Alliance’s core priorities for the future. In the midst of the most serious economic crisis in recent time, he launched “Smart Defence” to help nations make more efficient use of their resources through more multinational cooperation. And in response to Russia’s aggression against Ukraine, he initiated a “Readiness Action Plan” adopted by Heads of State at a historic summit in Wales to strengthen the collective defence to an unprecedented level since the end of the Cold War. A reformer who made the Alliance leaner and more efficient, Mr. Rasmussen also extended and strengthened NATO’s partnerships with nations around the world, making it the hub of a network of international security partnerships.

In addition to his commercial activities, Mr. Rasmussen founded in 2017 the Alliance of Democracies Foundation, a non-profit organisation for the advancement of democracy and free markets across the globe. The chief hallmark of the Foundation is the Copenhagen Democracy Summit, an annual conference dedicated to strengthening the resolve of the world’s democracies by providing a high-level strategic forum exclusively focused on the cause of democracy. Previous speakers include, among many others, former Prime Minister of the UK Tony Blair, former US Vice President Joe Biden, and US Secretary of State Michael R. Pompeo.

On the sidelines of the Copenhagen Democracy Summit Anders Fogh Rasmussen together with Michael Chertoff has launched the Transatlantic Commission on Election Integrity, which has John Kerry, Nick Clegg, Toomas Ilves, and Felipe Calderón among its members. The Commission is tasked with bolstering the defences of Western democracies against outside interference.

Born in 1953, Mr. Rasmussen earned an M.Sc. in Economics from the University of Aarhus in 1978. He is married to Anne-Mette Rasmussen with whom he has three adult children.