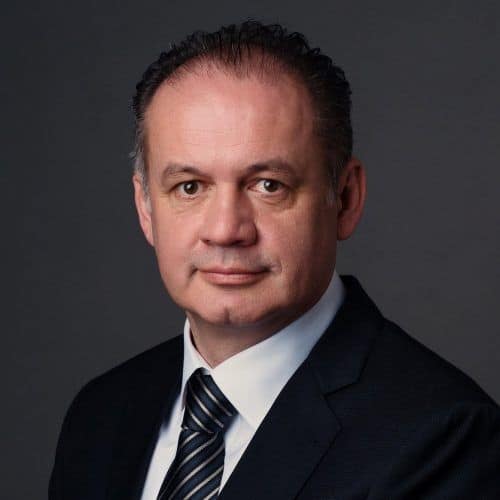 Andrej Kiska was born in Poprad, Czechosolovakia and moved to the United States after 1990. In 2006, Kiska co-founded Dobrý anjel, a non-profit charitable organisation dedicated to helping Slovakian families who find themselves in difficult financial situations.

"One of the most inspiring speeches I have ever heard!"

In 2014, he ran in his home country’s presidential election and became President of Slovakia on 15th June 2014. In addition to his charitable work with Dobrý anjel, throughout his term of office he donated his monthly presidential salary to those in need.

After graduating from college, he worked as a project engineer and when social conditions changed, and as a man from the ostblok could finally leave the country, he went to the United States. He worked on a gas pump, later as a helper on the construction site. After a year and a half, he returned to Slovakia as a co-owner of a business company, which after a few weeks went bankrupt. As a manager and entrepreneur, he worked for more than 15 years. He founded several companies, the most successful of which Triangle and Quatro provided financial services to more than 1 million people and became the most successful hire purchase companies in Slovakia.

In 2005 he sold all his shares, decided to dedicate himself to charity, and spent much of his lecture as a great motivation speaker. Together with his friend Igor Brossmann, he founded a non-profit organization Good Angel in 2006, which he donated from his own money for 1 million euros. Good Angel has created a massive community that aids families with children who have been in a difficult financial situation due to serious illness and is now the most successful non-charitable charity in Slovakia. He later co-founded Good Angel in the Czech Republic.

When he realized that despite the efforts of nonprofit organizations, the society fails to take effective care of the sick and the socially necessary and the society itself needs treatment, in 2012, A. Kiska decided to stand for the post of the President of the Slovak Republic as an independent candidate. In order to appeal from the highest post to politicians who forget about the problems of real people. And so the president actually did five years.