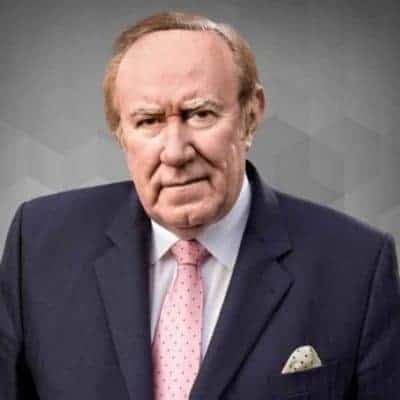 Most famous for his eleven years as the Editor of The Sunday Times, Andrew Neil is also in known for his role as television presenter for the BBC.

Andrew Neil was born on 21 May 1949 in Paisley, Scotland. He lived in the area whilst growing up and attended Paisley Grammar School on passing his 11-plus exam. After completing school he studied at the University of Glasgow to study for an in political economy and political science. During this time he was involved in the university’s newspaper and in student television as well as debating for the student union.

After graduating with honours from Glasgow, Andrew went on to work for the Paisley Daily Express as a sports reporter. He worked briefly for the Conservative Party before leaving to work for The Economist in 1973, where his talent soon led to promotion.

After some time as the editor of some UK elements of The Economist, Andrew left the publication on order to work for The Sunday Times.

At the time, many felt that he was too inexperienced for the position, but he excelled and remained editor for eleven years, between 1983 and 1994. In 1988 he was again accused of being an unsuitable candidate for his editorial role, this time due to the fact he had befriended Pamella Bordes, a former Miss India. An article was run in The News of the World in which it was hinted that Pamella Bordes was an escort. This prompted Sir Peregrine Worsthorpe of The Sunday Telegraph to label Andrew a playboy and write that he was not suitable for his post. Andrews reputation was salvaged by the libel case he took out against Sir Worsthorpe, which he won.

Andrew caused controversy again in 1992 after employing David Irving, a known Holocaust denier, to translate the diaries of Nazi propaganda minister, Joseph Goebbels. Many felt that Irving’s appointment was not appropriate and that he may not translate the diaries in a fully accurate way due to his pre-existing bias.

Whilst still working at The Sunday Times, in 1988 Andrew also became a chairman of Sky TV and helped introduce the service (and its best-loved characters, The Simpsons) to the UK. After an acrimonious split from News Corporation, Andrew worked for a time for The Daily Mail before moving to the Press Holdings newspaper group to work as Editor-in-chief. Today he still works with Press Holdings, having become Chairman in 2008. He is also involved in other businesses, including PFD, a talent agency.

Andrew likes sports, predominantly cricket. He was Lord Rector of St Andrews University for three years, between 1999 and 2002. He is currently in a relationship with Susan Nilsson, an IT engineer from Sweden.

Andrew Neil has worked as a television presenter, reporter and commentator for many years. Although he started out discussing news as an extension of his editorial work, in the 1990s he became more well-known on screen, working as a presenter for the BBC show Despatch Box.

He currently works as a presenter for the BBC on This Week, Daily Politics and Straight Talk with Andrew Neil.

Andrew Neil has had a long and varied career and is able to communicate his experiences and knowledge interestingly and effectively to audiences.

The Way Forward - Communication in Business

Electronic Commerce and the Internet