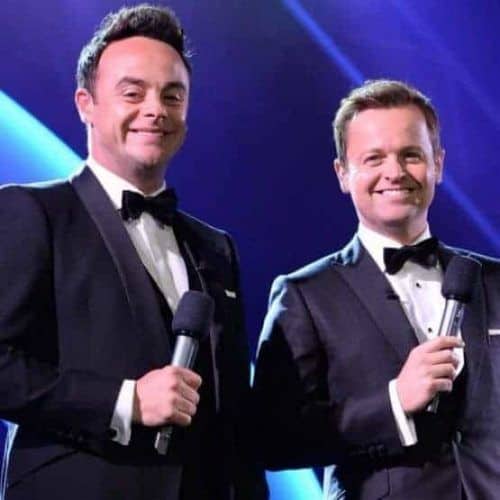 Co-hosts of “I’m a Celebrity…Get Me Out of Here!”, “PokerFace”, “Push the Button” and “Britain’s Got Talent” among many others.

The duo first met as actors on the children’s television show Byker Grove, during which and in their subsequent pop career they were respectively known as PJ & Duncan – the names of the characters they played on the show.

Since then, they have had a very successful career as television presenters, presenting shows such as SMTV Live, CD:UK, Friends Like These, Pop Idol, Ant & Dec’s Saturday Night Takeaway, I’m a Celebrity…Get Me Out of Here!, PokerFace, Push the Button, Britain’s Got Talent, Red or Black?, and Text Santa. In 2006, they returned to acting with the film Alien Autopsy. The duo presented the annual Brit Awards in 2001, 2015 and 2016.

They have their own production company, Mitre Television,[3] where they produce their shows.[4] In a 2004 poll for the BBC, Ant & Dec were named the eighteenth most influential people in British culture.

Both Ant and Dec were awarded OBEs by Queen Elizabeth in 2016, for services to broadcasting and entertainment.

Ant and Dec travels from: