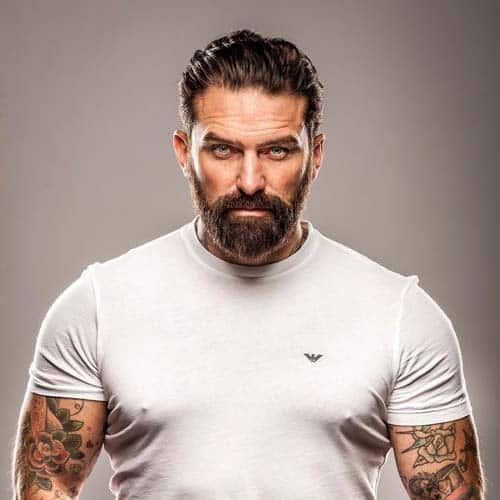 First Man In: Leading from the front

Ant Middleton is best known as the Chief Instructor for Channel 4’s hit show, SAS: Who Dares Wins. After three hugely successful series’, a Stand Up to Cancer Celebrity Special and a fourth series have already been filmed by Channel 4.

"We found Ant extremely engaging, he had a strong story and held great presence on the stage, he thoroughly entertained the audience and gave a clear message around leadership - this was one of the key part of the brief, which he understood and delivered on. The Q&A session was also very interactive, with some great questions that again really engaged people. Ant was refreshingly honest in his speech, which was excellent."

"The day went really well. Ant was great. Very accommodating, and happy to let us rush him around the event! I've attached a couple of photos. Please thank him for us - the buzz around the event was great this year, and I think a lot of that was due to his talk."

"Last night was brilliant thanks - Ant was superb and did exactly what we'd hoped he'd do and much more. Please could you pass on my personal thanks to Ant via his PA?Our audience was mainly military and ex-military (myself included) and his after-dinner speech really struck a chord with us all. Not only was he inspirational and thought-provoking, he was also very modest and humble. Everyone I've spoken to afterwards has been full of praise for Ant and the way he spoke about his past experiences."

In early 2018, Ant travelled around the UK on his tour ‘An Evening with Ant Middleton’. His book ‘First Man In: Leading From The Front’ was published by HarperNonFiction and reached No. 1 on The Sunday Times Best Seller List. Ant also was also filmed climbing Mount Everest, an adventure which tested him further than ever before.

In 2017, Ant captained a team of men, in Channel 4’s re-enactment of Captain William Bligh’s journey after the infamous ‘Mutiny on the Bounty’. He also led teams of engineers as they attempted to build a vehicle in extreme environments, in Channel 4’s engineering and survival based show ‘Escape’.

Born in Portsmouth and raised in rural France, Ant set his sights on a career in the armed forces and didn’t stop striving until he achieved his goal. He joined the Special Boat Service (SBS) in 2008 and spent 4 years there. The SBS is the UK’s naval special forces unit and the sister unit of the SAS.

He was a point man/lead scout and also a primary fires operator and sniper. Prior to joining the SBS, Ant also served in the Royal Marines and 9 Parachute Squadron Royal Engineers – meaning that he has achieved the ‘Holy Trinity’ of the UK’s Elite Forces (P Company, Commando Course, UK Special Forces Selection).

Thanks to his huge range of Special Forces experience, Ant has invaluable skills in survival and endurance. His appetite for adventure and extremes has no limit and has lead him to take on some amazing challenges.

Before SAS : Who Dares Wins, Ant transferred his Special Forces skills to personal security and was selected to protect VIPs, including government officials and high profile celebrities, he also operated as a security expert in South Africa and across various other countries for governments in West Africa. He has trained presidential security teams and also ran extreme SAS style corporate events for large companies who wanted to truly experience the extremes of Special Forces selection.