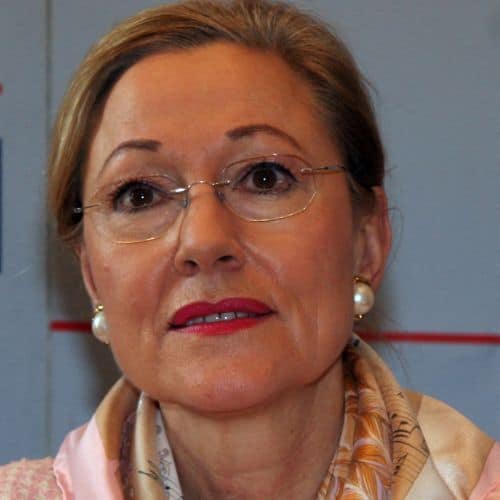 Dr Ferrero-Waldner has made her name in Austrian politics and is a respected speaker who is especially knowledgeable about European and international relations.

Speaking with confidence about the subjects in which she is an expert, Benita can inform and inspire her audience. She began her diplomatic service in 1984, after spending several years working in the private sector. Her roles gradually became more influential and at one point she worked in New York for the United Nations for Boutros Boutros-Ghali, the then Secretary General.

Benita was born in Salzburg, Austria on 5 September 1948. After completing school, she went on to study at the University of Salzburg, achieving a doctorate in law in 1970.

Ferrero-Waldner became Under-Secretary of State for Franz Vranitzky and then Viktor Klima, both of whom were Social Democrats. She held this position between 1995 and 2000, when she became Minister for Foreign Affairs under Wolfgang Schssel.

In 2004, Ferrero-Waldner became the Austrian Peoples Partys presidential candidate. Although she lost the election, it was by a small margin and later in the same year she went on to become Austrias European Commissioner for External Relations and European Neighbourhood Policy, which she remained until 2009, when she became the European Commissioner for Trade and European Neighbourhood Policy.

She became a member of global reinsurance firm Munich Res Board of Directors in 2010. She also sits on the Board of Gamesa Corporacion Tecnolgica S.A, a renewable energy company specialising in wind turbines. She is also a member of the Alpine Supervisory Board, of the International Advisory Board of Norman Foster and of the Foundation Principe de Asturias y Girona. She is also a trustee of the Foundation for International Relations and Dialogue (FRIDE), a European think-tank examining international relations and supporting democracy.

Her most recent positions include being made a president of the European Union, Latin America and the Caribbean Foundation (EULAC) and a chairman of the Euroamerica Foundation, both in 2011.

As a diplomat, Benita was instrumental in a high profile case involving the release of six prisoners who were being held by Lybia. The Palestinian doctor and five Bulgarian nurses were accused of deliberately infecting children in their care with HIV, something that they had consistently denied. The controversial case had attracted worldwide interest, with experts stating that the mass infection was probably due to other causes and information eventually emerging that the suspects had been tortured into confessing to the crimes. They had been imprisoned for eight years and Ferrero-Waldner had visited them regularly, eventually helping to enable their release to Bulgaria in July 2007.

Benita married her first husband, teacher Wolfgang Sterr, in 1974. They remained together until 1983, when they divorced. Benita Ferrero-Waldner remarried ten years later. Her second husband is Professor Francisco Ferrero Campos, a lecturer at the University of Vienna.

Ferrero-Waldner has worked to help improve the lives of children infected with HIV and those who have developed AIDS.

Is there a Future for Europe?