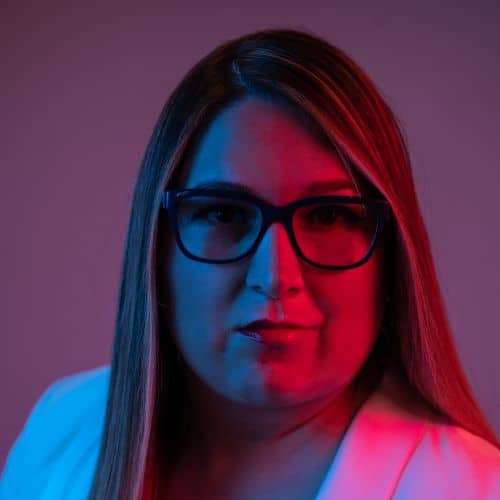 Cathy Hackl is a globally recognized augmented reality, virtual reality and spatial computing thought leader. She’s been named one of the top 10 Tech Voices on Linkedin for two years in a row, the highest honor on the platform.

"Cathy is a phenomenal speaker who is able to engage the crowd with her well-rounded experience and anyone could tell how passionate she was for the future of virtual reality. Not only was her keynote speech intriguing and informative, but her question and answer segment was one of the most interesting aspects of the conference. She was able to offer insight on so many sides of the industry and will always be welcomed back at OrlandoiX."

"Cathy is knowledgeable, engaging, and passionate about the field of technology and social media. I came away with so much information that I am excited to move forward and try new ways to get information out through a variety of tools and platforms."

"Cathy Hackl is not only a seasoned broadcaster, but a compelling trainer who received a 90 percent approval rating at a Public Relations Society of America's recent workshop. Cathy's ability to share implementable strategies, while offering cutting-edge digital engagement techniques, was impressive, especially considering her audience - career communicators."

"As a notable tech leader and futurist, we invited Cathy Hackl to keynote the Nevada Governor's Global Tourism Summit. Her talk was informative, engaging and really showcased how Nevada can be a leader when it comes to tourism innovation."

Cathy is a leading futurist and one of the top technology voices on LinkedIn. As a thought leader, Cathy only works with brands she believes in and that she knows are respected and highly regarded in the industry. Brands work with Cathy to expand their reach, amplify the launch of new products or services, get access to her network, and for business development.

Cathy currently works as part of the Enterprise team at one of the industry’s top OEMs. Cathy is working on her second book ‘The Augmented Workforce: How AI, AR, and 5G Will Impact Every Dollar You Make’, co-authored with John Buzzell, an award-winning leader in the digital industry.

Prior to that, Cathy was the lead futurist at You Are Here Labs, where she led agencies, brands and companies in applying Augmented Reality and Virtual Reality for marketing and training working with brands like AT&T & Porsche.

She worked as a VR Evangelist for HTC VIVE during the launch of their enterprise VR headset and during the company’s partnership with Warner Brothers’ blockbuster, Ready Player One. She’s the co-author of Marketing New Realities, the first VR AR marketing book ever written. She also worked as Chief Communications Officer for cinematic VR studio Future Lighthouse, where she collaborated on projects with Sony Pictures Entertainment, Oculus, Beefeater and William Morris Endeavor.

Hackl has been featured in media outlets like Forbes, Barron’s, Salon, VentureBeat, Digiday, Tech Target, CMO.com and Mashable. She is a global advisor for VR AR Association and was recognized in 2016 by NBC News as one of the top Latina women working in VR.

Before working in spatial computing and technology, she worked as a communicator at media companies such as CNN, Discovery, and ABC News and was nominated in 2007 for an EMMY Award for her storytelling work. She’s also the creator of the world’s first holographic press release and loves all things spatial computing, artificial intelligence and futurism.