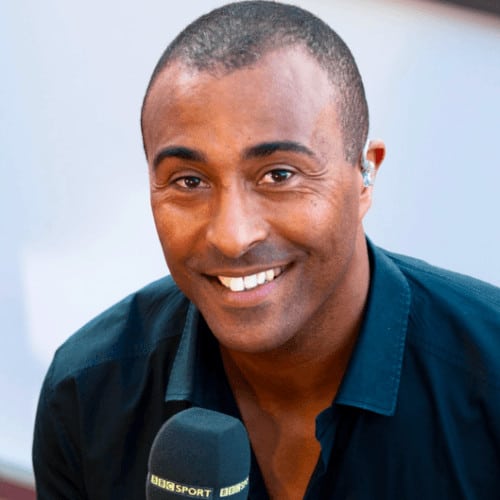 Master-classes in motivation from a champion sportsman and world record holder.

A thoughtful but strong minded individual, Colin Jackson is an exceptional inspirational speaker. His experience in sport and his work as a coach mean that he is ideally placed to help motivate and educate people of all ages and backgrounds.

Born in Cardiff on the 18th of February 1967, Colin Ray Jackson has ancestors with Jamaican, Maroon, Taino, and Scottish origins. He attended Llanedeyrn High School and took part in numerous sports, playing basketball and rugby for his school and cricket and football for his county.

He has said that athletics felt as though it came naturally to him, especially the 110 metre hurdle event. As a youth he joined a local athletics club called the Birchgrove Harriers, learning new skills and finding the support he needed to pursue his dream career. Jackson went on to be a successful junior sportsperson, rising through the ranks and training hard to improve his performance.

As well as winning titles within European competitions, Jackson continued to be successful on an international level. He won gold in his favourite competition, the 110 metre hurdles, at the World Championships in Stuttgart (1993) and Seville (1999), winning the indoor 60 metre hurdles at Maebashi in 1999. Jackson also won gold for his 110 metre hurdle performance at the Commonwealth Games in 1990 and 1994.

In addition to his numerous golds, Jackson holds many silver medals and a bronze. His dream of succeeding at another Olympics was thwarted by injury in 1992; he failed to reach a top three position in any of the events he entered.

Jackson was awarded an MBE in 1990 for services to athletics and in 1992 was awarded the even higher accolade of a CBE due to his continued achievements.

Colin Jackson retired from professional competitive sport in 2003, after the World Indoor Championships. He has since been a coach to several high profile sports people and has worked for the BBC as an athletics commentator.

Jackson worked for the BBC as a host of the popular Born to Win, a show in which young sports people compete to win a bursary to enable them to pursue their sporting ambitions. Always keen to inspire and encourage young people, he has also presented Raise Your Game with Colin Jackson in which he interviews sporting celebrities. He has appeared on several other TV shows, including Celebrity Strictly Come Dancing and Who Do You Think You Are.
After writing his books, Jackson contributed some hints and tips for new writers for the BBCs Raw Words, a website which aims to help adults to improve their skills.

With Richard Owen, a former Executive Producer for the BBC, Jackson set up his own media production and consultancy company, Red Shoes.

Jackson is a specialist in sport and culture for the Zeitz Foundation, a not-for-profit organisation involved in preserving eco-systems, providing innovation in sustainable land management, and assisting people in need.

Striving for Excellence & Pressure to perform