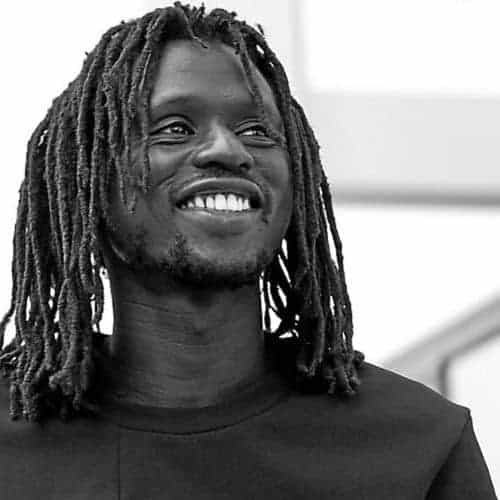 From his start in life as a child soldier in the war-torn region of Southern Sudan in the early 1980s, Emmanuel Jal has come through a huge number of struggles during his life to become a successful and acclaimed recording artist and peace ambassador.

"Emmanuel Jal somehow managed to be inspiring, hilarious, and meaningful at the same time. He was able to keep the entire audience engaged and definitely left his mark. He was amazing!"

"He [Emmanuel] leaks life and passion for his cause, which given his circumstances and troubled past, is more than understandable... moreover, it’s addictive to listen to."

"Listening to what he [Emmanuel Jal] said I felt really inspired to help make a change. He inspired me because it showed me that even at your darkest moments good things are to come."

"He is an extraordinary artist, led by the heart. A man on a mission with the potential of a young Bob Marley with a generosity and compassion in his approach to the world that is an inspiration to me."

Drawing on his personal experiences and background, he speaks and performs with a strong message of reconciliation and peace, and has addressed the UN, US Congress, the Carter Centre and the very highest level of several governments.

During his career, he has been involved with a number of global charity organisations, including the British Council, the Child Soldiers Initiative, Amnesty International and Oxfam. He has spoken alongside major players in the world of global humanitarianism, including Kofi Annan, Ban Ki-Moon and The Elders Group and Martti Ahtisaari for CMI in Finland, Matt Dillon for Refugees International and Angelina Jolie at the ICC for Cinema for Peace. Emmanuel has also been invited to speak at Richard Branson’s Virgin Unite conference on Necker Island numerous times on leadership and philanthropy. He has continued to support and work alongside Amnesty International as one of their main spokespeople and has received numerous awards for his peace efforts in South Sudan including recognition from Ban Ki Moon at the UN.

In 2008 a full-length documentary on his life was released. The film, ‘Warchild’, won 12 prestigious film festival awards worldwide. In the same year, his autobiography, also called ‘Warchild’, was published by Little Brown.

Emmanuel has released six award nominated studio albums: Naath, The Key, Gua, Ceasefire, Warchild and See Me Mama – a mixture of Afro pop and hip hop with unique sounds from his homeland of South Sudan. His live appearances have included Live 8, Nelson Mandela’s 90th Birthday Concert and the One Concert for his Holiness the Dalai Lama. He has collaborated and performed alongside artists such as Lauryn Hill, Xavier Rudd, Peter Gabriel, Nelly Furtado, Darryl “DMC” McDaniels, Joss Stone, Ed Sheeran, Nile Rodgers and Alicia Keys.

Emmanuel co-starred with Reese Witherspoon in the Warner Brothers motion picture, The Good Lie which tells the story about the journey of four young Sudanese refugees (based on The Lost Boys of Sudan) who win a lottery for relocation to the United States. The film made its debut to rave reviews at the Toronto International Film Festival before being released in October 2014. Emmanuel has also appeared as the adult lead in the major motion picture Africa United; a Pathé, UK Film Council and BBC Films presentation in association with Warner Bros, released in October 2010.

Also in 2010, Jal released ‘We Want Peace’, part of a wider campaign of the same name that called for peace, protection and justice for all of Sudan, as well as calling for an end to all conflicts that affect innocent people around the world. This campaign is supported by a number of A-list stars and leaders, including George Clooney, Alicia Keys, Richard Branson, Nelson Mandela, Jimmy Carter and Kofi Annan. Through social media and fan participation, the campaign has grown in strength and Emmanuel’s message of peace has resonated particularly amongst young people, allowing them to connect to larger social and political issues through emotional empathy. With the support of organizations such as Free The Children, Amnesty International, Ford Foundation, Humanity United and many others, Emmanuel has taken ‘We Want Peace’ on the road and spoken to hundreds of thousands of young people from all over the world, touring across Mexico, the UK, the US, Kenya, Zambia and Canada. Often these tours include visits to community centers, youth detention centers and prisons where Emmanuel has been able to speak first hand to young people who have become disengaged with education and society.

For his outstanding commitment to peace building, Jal has been awarded the Vaclav Peace Laureate 2018, Desmond Tutu Reconciliation Award 2017, Hero in the global campaign against violent extremism – UNESCO 2016, The Hunt Humanitarian Award, The Dresden Peace Prize and The Common Ground Award amongst others. In 2012, he was asked to be a Young Global Leader for the World Economic Forum, and he has performed at the G20 summit in Mexico.

Emmanuel has started the My Life is Art community, which harnesses a commitment to self development with daily practices that aligns purpose, vision and mission. He runs annual retreats in Kenya and North America as well as corporate and educational workshops.

Emmanuel founded his charity Gua Africa which provides educational programs for those affected by war and displacement in East Africa. The programs offer academic scholarships to refugees, as well as a range of comprehensive, purpose driven initiatives which promote creative wellbeing and leadership in order to address more sustainable solutions for peace and independence for its young beneficiaries.

My Life is Art

Through his energetic and unique storytelling approach, Jal inspires audiences to find their own inner peace and balance to cope with stress and anxiety.

Through this presentation, participants will:

In this compelling presentation, Emmanuel uses the power of spoken word and music to provide a truly authentic insight into the complex global issues around poverty and war. Centered around Emmanuel’s remarkable personal experiences, he offers essential knowledge and practical wellbeing tools suitable for any young person.

An accompanying educational pack can be included to this keynote which includes online resources and lessons brought to students through a series of intimate talks, lessons and interactive opportunities.

War Child a Story of Survival

Emmanuel offers a greater philosophical message about war and peace. He translates his traumatic past as a child soldier into a positive experience that reflects the strength of human character. His lecture focuses on the power of human generosity, the need for political support in Sudan and what each of us can do to make a difference. Music is central to his message and at each appearance as Jal raps for freedom and sings for absolution.

Emmanuel shares his experience as a child soldier for the purposes of social-emotional learning and peace education, while still creating awareness on various issues. We Want Peace maximizes on the learning opportunities around Emmanuel’s story which enable audiences to understand more fully the complex uses around child soldiers, forced migration, war and how to engage in a more peaceful life, starting with education.

The Journey of a Refugee

Emmanuel shares the story of his remarkable journey from Sudan to Canada. At 11 years old he met a British aid worker who insisted he should not be a soldier. She adopted him and smuggled him to Kenya. After her death he was forced to live in a refugee camp where he focused on music. His songs soon received international acclaim. Now living in Canada, Emmanuel is a model refugee, citizen and someone who gives back to his community.

In this presentation he shares his experiences and perspective as a refugee.