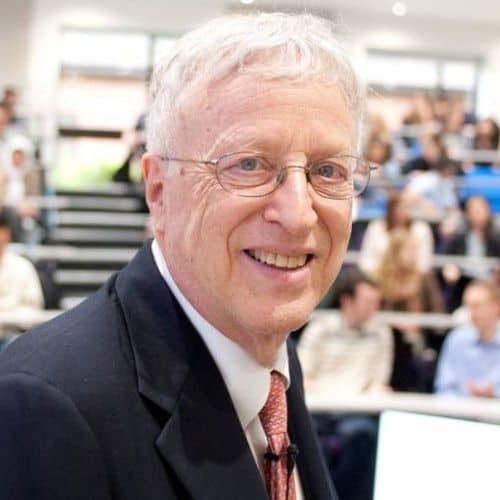 A Nobel Prize-winning economist with the originality, knowledge and insight to inform and inspire.

Who is George Akerlof?

George Akerlof is a foremost economist and an experienced lecturer. His speaking style reflects his ability and experience and audiences are sure to gain valuable insight into the economy and related forces.

Akerlof is a Nobel Prize winning economist whose best known work includes research into asymmetrical information in markets and his use of psychological and sociological theories in economics. He has worked as a professor at several prestigious universities.

George Arthur Akerlof was born on the 17th of June 1940 in the Connecticut city of New Haven. He attended Lawrenceville School before going on to study at Yale University. He graduated with a B.A. in 1962 and moved to M.I.T, where he completed his doctorate, becoming a Ph.D. in 1966.

After graduating from M.I.T, Akerlof began working at the University of California as an assistant professor. Whilst in this role, he also spent some time at the Indian Statistical Institute as a visiting professor. In 1969, he spent the summer working at Harvard as a research associate. In 1970, he became an associate professor at California, becoming a professor in 1977. In 1973 and 1974 he also held a position on the Council of Economic Advisors as a Senior Staff Economist. He worked with the Board of Governors of the Federal Reserve System for a year between 1977 and 1978 as a visiting research economist.

George Akerlof moved to the London School of Economics in 1978, where he occupied a prestigious role as Cassel Professor of Money and Banking

In 1994, Akerlof began working with the Brookings Institute as a senior fellow, a role he still occupies today. He is also currently still a professor at the University of California.

Akerlof is a fellow of several prestigious organisations, including the Econometric Society, the American Academy of Arts and Sciences, and the Institute for Policy Reform.

In the year 2000, Akerlof was awarded an Honorary Doctorate from the University of Zurich.

George Akerlof is married to Janet L Yellen, a professor of economics at the University of California and vice chairman of the Board of Governors of the Federal Reserve System. They have one child, a son named Robert who also works in economics.

Akerlof is co-director of the Canadian Institute for Advanced Research Social Interactions, Identity and Well-Being program. He is also a trustee Economists for Peace and Security, an organisation which aims to encourage the use of non-military solutions in problem solving, all over the world.

How Human Psychology Drives the Economy

Is there an Optimal Balance between Government Policy and Free Market Forces?