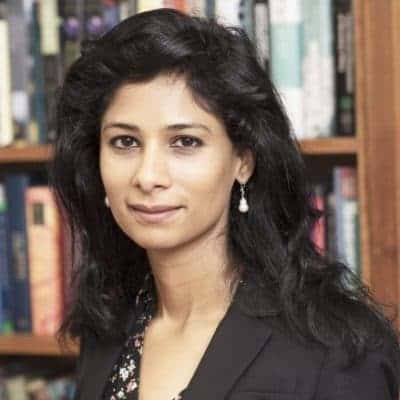 Gita Gopinath is the John Zwaanstra Professor of International Studies and of Economics at Harvard University. She is currently on leave of public service from the economics department to serve as the Chief Economist of the International Monetary Fund (IMF).

Her research focuses on International Finance and Macroeconomics. She is the co-editor of the current Handbook of International Economics and was earlier the co-editor of the American Economic Review, managing editor of the Review of Economic Studies and co-director of the International Finance and Macroeconomics program at the National Bureau of Economic Research. She was a visiting scholar at the Federal Reserve Bank of Boston, member of the economic advisory panel of the Federal Reserve Bank of New York, Economic Adviser to the Chief Minister of Kerala state in India and member of the Eminent Persons Advisory Group on G-20 Matters for India’s Ministry of Finance.

Professor Gopinath is an elected fellow of the American Academy of Arts and Sciences and of the Econometric Society. She is the recipient of the Pravasi Bharatiya Samman, the highest honour conferred on overseas Indians by the Government of India and the Distinguished Alumnus Award from the University of Washington. Foreign Policy named her one of the Top Global Thinkers in 2019; the IMF named her one of the top 25 economists under 45 in 2014; Financial Times named her one of the 25 Indians to Watch in 2012; and she was chosen as a Young Global Leader by the World Economic Forum in 2011.