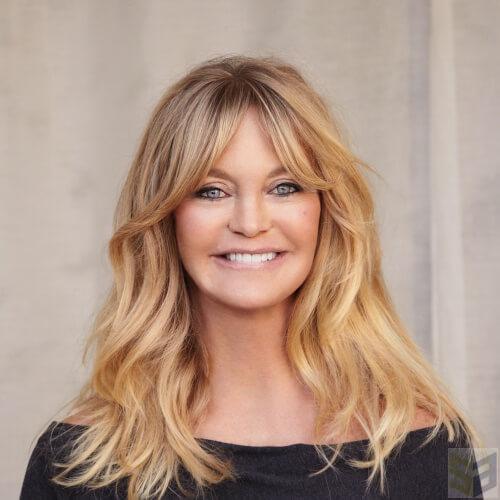 Academy Award-winner Goldie Hawn started her career at the age of three, being trained as a dancer.

"Her talk was great! We ordered her book '10 Mindful Minutes' and sold out of every copy right after her talk."

The Women's Board of Wolfson Children's Hospital

"She was a hit. Everyone loved her. She is very lovely. She speaks without any note cards... about her life and of course, happiness. She is animated and [the crowd could] really relate to her. I don't know how we can top this. Thank you for everything. I love you guys!"

By 17, she was running her own ballet school. Following this, she made her film debut in ‘The One and Only Genuine, Original Family Band’, winning the Academy Award for Best Supporting Actress in 1969 for her role in ‘Cactus Flower’.

Following her success, she worked on a number of other feature films, including starring in ‘The Sugarland Express’ – Steven Spielberg’s directing debut. She took time away from the silver screen to nurture her growing family, retuning to both star in and executively produce her own projects – becoming a trailblazer for women in film. One of these projects, ‘Private Benjamin’, earned her an Academy Award nomination for Best Actress.

Her film achievements continued to flourish and she stared with some of the biggest names in film in the 80s and 90s. Awards nominations also continued, with her receiving a nomination for Best Actress at the Golden Globes. Hawn has published two best-selling books, her memoir ‘A Lotus Grows in the Mud’ (2005) and ’10 Mindful Minutes’ (2011), a book on how to raise healthy and happy children.

Away from film, Hawn is a lifelong humanitarian and founded The Hawn Foundation in 2003, a non-profit public charity dedicated to helping children reach their potential. The Foundation works closely with leading neuroscientists, educators and researchers in the field. They developed MindUP™, a teaching system for grades K-8 that gives children the tools to understand their own feelings, reduce stress and anxiety and improve academic performance. As of today, MindUP™ is being taught in six different countries including the U.S., UK, China, Venezuela and Australia, to cite just a few.

Hawn is a highly accomplished and entertaining public and keynote speaker.

Words from the Leading Lady: Learning When to Lead & When to Follow

Changing the World One Mind at a Time

Laughter Is the Best Medicine