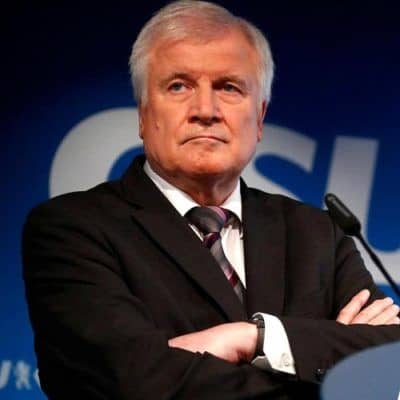 Horst Seehofer is a German politician serving as Leader of the Christian Social Union (CSU) from 2008 to 2019 and Minister of the Interior, Building and Community since 2018 under Chancellor Angela Merkel.

In October 2008 he became Leader of the CSU and the 18th Minister President of Bavaria. From 1 November 2011 until 31 October 2012 he served as President of the Bundesrat and ex officio deputy to the President of Germany. Because of that he was Acting President of Germany after the resignation of President Christian Wulff on 17 February 2012 and before the election of Joachim Gauck as Wulff’s successor on 18 March 2012.

A staunch opponent of Chancellor Angela Merkel’s refugee policy, Seehofer has threatened to file a formal complaint against the Merkel government’s refugee policy with Germany’s Constitutional Court and is a proponent of a federal cap on the number of refugees the German government is to take in.

After secondary school, Seehofer started working as civil servant in the local administration in Ingolstadt. He is married to Karin Seehofer and resides in the Ingolstadt district of Gerolfing.