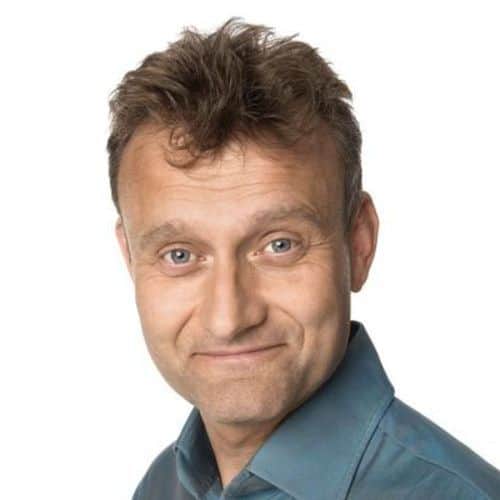 Hugh Dennis is a comedian, writer, actor, impressionist and voice-over artist, best known for his work with comedy partner Steve Punt and for the comedy series ‘Outnumbered’ and ‘Mock the Week’.

He is also a talented and captivating after dinner speaker and awards host.

"Hugh seemed to go down a storm, he was getting lots and lots of laughs when he did his 20 mins free-style at the beginning. He checked some content with us before-hand, which was sweet, as we don't usually have that. He was respectful of the awards and the script, and kept to it very tightly! He was a joy to have on the table and they enjoyed his company."

"Hugh was a great Awards host and his pitch was just right. He took time during the briefing to understand our business and was able to incorporate some really funny industry insights into his opening slot. He followed the brief, kept the evening running to time and was very sociable with the audience. Everyone loved him."

"He was brilliant and a perfect choice for the awards. This event is always the more challenging of our two award shows as its senior management and these people go to this type of event a lot however Hugh really did his homework on the company and industry which really paid off. He was also incredibly easy to work with and very laid back."

Hugh grew up in Mill Hill in North London. He was educated at University College School, an independent school for boys in Hampstead, and at St John’s College, University of Cambridge, where he read geography. He was a member of the Cambridge Footlights, but after university worked for Unilever for six years. However, with Steve Punt, whom he met at university, he carried on doing comedy at London’s Comedy Store. As mentioned on an episode of ‘Have I Got News For You’ he attended University College school with Will Self where they played rugby together.

A skilled impressionist, Dennis did voices for Spitting Image and appeared with Punt as resident support comics on two TV series hosted on the BBC by Jasper Carrott.

The pair went on to form half of ‘The Mary Whitehouse Experience’ on BBC Radio 1, later graduating to a television series. His radio work with Punt includes over a decade of performing Punt and Dennis, It’s Been a Bad Week and The Now Show as well as writing The Party Line (a topical political satire written and performed the day prior to transmission). On The Now Show he headlines with Punt, Mitch Benn, Laura Shavin, Jon Holmes and Marcus Brigstocke.

Dennis has performed on various TV and radio shows, including The Imaginatively Titled Punt and Dennis Show and sitcom Me, You and Him. He has guest hosted Have I Got News For You and played obnoxious GP Piers Crispin in BBC sitcom My Hero. He is friends with Chris Morris and has had cameos on Brass Eye. He is in huge demand as a voiceover artist and he currently appears on the panel game Mock the Week, in which he frequently refers to Showaddywaddy and car insurance.

Since August 2007 Dennis has starred in the hit BBC comedy ‘Outnumbered,’ a semi-improvised sitcom based around family life which has won numerous awards and praise.