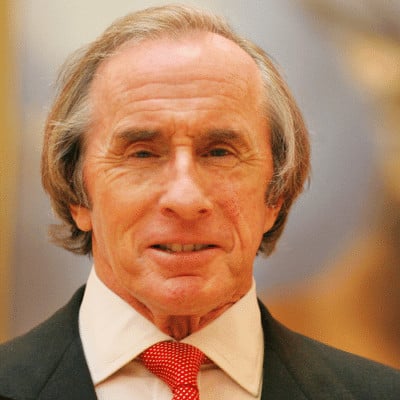 A three-time Formula One champion, Sir Jackie Stewart is recognized globally as one of the most successful motor racing personalities of all time.

Nicknamed the Flying Scot, Sir Jackie Stewart OBE is one of the greatest racing drivers of all time. Competing in Formula One between 1965 to 1973, Sir Jackie won three World Drivers’ Championships whilst becoming an authority within the support for the promotion of safety in motorsport. An intriguing and very knowledgeable motorsport speaker, audience members will have the privilege of hearing from one of the sport’s true legends.

Growing up in West Dunbartonshire, Stewart’s family ran a successful car dealership and both Jackie’s father and brother had a heavy involvement in motorsport, including an appearance at the 1953 British Grand Prix. By the age of 13, Jackie had become a leading clay pigeon shooter, going on to become a prize-winning member of the Scottish shooting team.

Sir Jackie began testing race cars in 1961. Showing his skill and raw pace, Stewart quickly worked his way up the ranks before grabbing s drive in the 1964 Formula Three Championship for Tyrell. In his debut race at Snetterton, Jackie pulled out a twenty-five second lead within two laps and went on to win the race comfortably, 44 seconds in front of his closest rival. Becoming a Formula Three Champion on his debut season, the offers from Formula One came thick and fast. Discussing how he maximised success at every opportunity in the early stages of his career, Jackie delivers thought provoking ideas as an after dinner speaker that are relatable to sporting and business environments alike.

Jackie’s first race in an F1 car was for Lotus in December 1964 in South Africa, by the end of his first season, Stewart had finished his rookie season third in the World Drivers’ Championship, proving his potential as a future World Champion.

1966 triggered Jackie’s lifelong fight for better safety in his sport. Following a crash at the 1966 Belgian Grand Prix, Jackie was left trapped in his overturned BRM soaking in fuel. With no tools to help him, stewards had to wait for other drivers Hill and Bondurant to help after borrowing a spanner from a spectator. From now on, Jackie would tape a spanner to his steering wheel, travel to races with his own doctors whilst his team supplied a medical truck for the benefit of all. A hugely passionate subject for Jackie, driver safety can feature heavily in his talks as a motorsport speaker. The harsh reality of danger in his day makes for a compelling insight into the sport and how far things have come since then.

Stewart became Formula One world champion in 1969 in a Matra MS80 before going on to win the 1971 and 1973 World Championships for Tyrell. A hugely talented racing driver, Jackie left a legacy of increased in-car safety as well as drastic improvements to the layout and design of tracks, all in the name of limiting risk to drivers. A wonderful motorsport speaker with a wealth of knowledge in hospitality and entertainment, Sir Jackie Stewart OBE is an ideal personality and event host for your function.

The elements of success

The Business of Sport

Overcoming obstacles on the road and off

Leadership: Driving your way to the top

Going out on top: How and when is the right time?

Management: From the cockpit to the boardroom