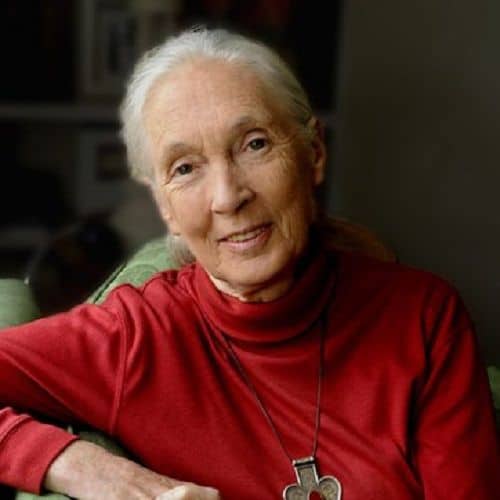 Founder of the Jane Goodall Institute & UN Messenger of Peace

Dr. Jane Goodall DBE is an ethologist and environmentalist, Founder of the Jane Goodall Institute and a UN Messenger of Peace. Her research into the lives of wild chimpanzees of Gombe, Tanzania began in 1960 and continues today.  She has redefined species conservation to include people and the environment and empowers young people of all ages to make a positive difference in their world through Roots and Shoots.

"It was amazing!! Everyone had the best time - she was funny, the message was perfect...just awesome."

"Everyone is still talking about how extraordinary it was to hear you and how much your work has changed our perceptions of our relationship to other beings. That you have lived your life so decidedly on your own terms - and in the process have given us so much new knowledge and understanding of our world - has been a wonderful inspiration. Your visit was a highlight of the year for all of us here."

"Your life certainly exemplifies many of the values we encourage here at Strong: striving to achieve goals, then reaching higher for the next ones; persistently pursuing the answers to your questions; and importantly, doing work you love. Our associates have been telling us in the past week and a half how much it meant to have you here, and how your stories touched them. You are a woman of great conviction, which comes across clearly, even with your soft."

"The over-the-top capacity audience was an indication of your stature in the field of primatology and as you can tell, our community was looking forward to your presentation. Your anecdotes about your experiences and insights into your work at Gombe, as well as your own childhood were most memorable, and many people have told me how excited and inspired they were from your lecture."

"World-renowned scientist Jane Goodall, Ph.D., DBE, spoke last night at the Freede Center as a part of the Distinguished Speakers Series. We estimate that we had 4000 people in attendance for her lecture, each of whom no doubt left feeling more inspired than when they came! Dr. Goodall signed books until 12:50 a.m., which is the longest book signing in our history and within 30 minutes of the longest in hers!"

"She was absolutely fantastic! I can't say enough about her. Our audience loved her and would absolutely recommend her to another group. She even brought me to tears!"

"It was a treat to work with Jane Goodall and her associates. All the members of her team were friendly and professional, and were immensely helpful in setting up the book selling and signing space. Jane Goodall herself was a delight. She is an undemanding celebrity, who cheerfully gave greatly of herself during her time at Hanover College. Dr. Goodall drew an audience of some 2,500 people to the College, the largest convocation audience here in decades. Her talk was insightful and inspiring. After a Q&A period, Dr. Goodall spent three hours signing books. She will not leave until everyone who wants a book signed or a photo has been satisfied. Dr. Goodall’s visit truly was an EVENT – something that will be remembered here for years."

Renowned for her landmark study of chimpanzees in Gombe National Park, Tanzania, Dr. Jane Goodall DBE is one of the world’s most famous scientists. She is a global leader in the effort to protect chimpanzees and their habitats, and to that end she set up the Jane Goodall Institute in 1977 to supports the Gombe research.

In 2002 she became a UN Messenger of Peace, and was invested as Dame of the British Empire in 2004. She delivers fascinating speeches on humanitarian, socio-ecology, conservation and issues affecting the developing world, and is a highly accomplished public speaker.

She has also featured in many popular television documentaries and has written an extensive number of books, including two overviews of her work at Gombe, two autobiographies in letters, her bestselling autobiography and many children’s books. However, The Chimpanzees of Gombe: Patterns of Behaviour is recognised as her definitive work, and is the very culmination of her career.

Dr. Goodall founded Roots and Shoots with a group of Tanzanian students in 1991. Today, Roots and Shoots connects hundreds of thousands of youth in more than 120 countries who take action to make the world a better place for people, animals and the environment.

Dr. Goodall has been the subject of a number of documentaries, and features in a large-screen format film. She has also featured in two Discovery Channel Animal Planet specials, and is a riveting and engaging corporate and after dinner speaker.

In her speech, Making a Difference, Dr. Goodall will first bring her audience into the world of the Gombe chimpanzees — from her early observations and experiences to the latest news and stories from the field.

Sowing the seeds of hope

In her speech, Sowing the Seeds of Hope, Dr. Goodall will first bring her audience into the world of the Gombe chimpanzees – from her early observations and experiences to the latest news and stories from the field.