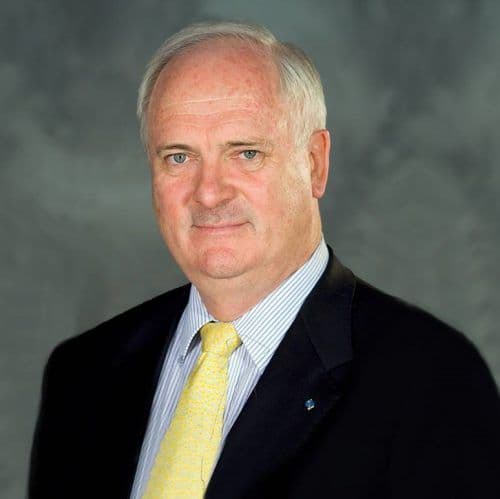 John can speak on international trade issues based on his experience as Ambassador in Washington. He is also an expert on Brexit and have published widely on the topic.

An experienced politician and an expert on Irish and European politics, John can educate, inform and inspire audiences.

John Gerard Bruton was born in County Meath on the 18th of May 1947 to a Catholic family. He attended Clongowes Wood College, a boys boarding school in County Kildare. He went on to study for a B.A. at University College Dublin, before qualifying as a barrister with the Honourable Society of King’s Inns.

At the age of 22, Bruton was elected as Fine Gael TD for Meath (becoming a member of Dail Eireann). Success in his role saw him appointed to Parliamentary Secretary to the Minister for Industry and Commerce and to the Minister for Education by the National Coalition in 1973, a role which he occupied for four years.

In 1977, Bruton became Spokesperson on Agriculture, following the defeat of Fine Gael during the general election. He was then promoted to the shadow Finance portfolio.

In the 1981 general election, Bruton was heavily involved with Fine Gael’s campaign, assisting them to their place in a coalition with the Labour Party. At the age of 34, Bruton became the Minister for Finance.

The economic situation at the time meant that the coalition government, which had no majority, had to introduce a severe controversial budget. As a result Fine Gael lost power in January 1982.

Leadership of Fine Gael Bruton first became a candidate for the role of leader of Fine Gael in 1987, following the party’s defeat and the resignation of Garret FitzGerald. He lost out on the spot to Alan Dukes, becoming deputy leader. When the party was defeated in 1990 in a Presidential Election, Bruton became the party’s leader.

As leader of the party, Bruton was often pigeon-holed by the opposition and the media as a more right wing individual than his predecessor. On this basis, some of his actions surprised the public, including his policy to introduce and pass a referendum to allow divorce in Ireland. Despite Brutons policies, Fine Gael lost out to a Labour coalition with Fianna Fail in the 1992 election. In 1994, Bruton was able to form a government with the Labour Party and Democratic Left after the previous Fianna Fail/Labour coalition government collapsed. At the age of 47, Bruton became one of the youngest Taoisigh in Irish history up to that time.

Taoiseach Bruton was Taoiseach between 1994 and 1997 and became known for his moderate views (identifying with non violent approach of the Irish Parliamentary Party). His relationships with the UK and his contribution to the Northern Ireland Peace Process are some of the aspects of his tenure which are most well remembered.

During Brutons time as Taoiseach, the British Royal Family made an official visit to Ireland since 1912, a sign of improved relationships. In 1997, while Fine Gael gained seats, the party lost government because of greater seat losses by its partners in the Labour Party.

In 2011 Fine Gael invited Bruton to stand as a candidate for the Presidency of Ireland, he declined their offer.

Bruton remained the leader of Fine Gael until 2001. His support of European integration saw him become one of the Irish Parliament Representatives to the European Convention. After resigning from the Dail Eireann in 2004, he became the European Union Ambassador to the USA.

As an experienced politician and former leader, Bruton often lectures at universities all over the world.

From 2010 to 2015, Bruton became the Chairman of IFSC Ireland, which aimed to develop Irelands financial services industries.

In 2011, he became an advisor to the journal Fair Observer, specialising in finance, economics and politics. He is on the board of the Centre for European Policy Studies. He is a visiting fellow at the European Institute in the London School of Economics. He hold a number of commercial directorships.

Bruton and his wife Finola have four adult children.

The Rise of the European Union

Europe and US Relations: How to Improve and Mend Them