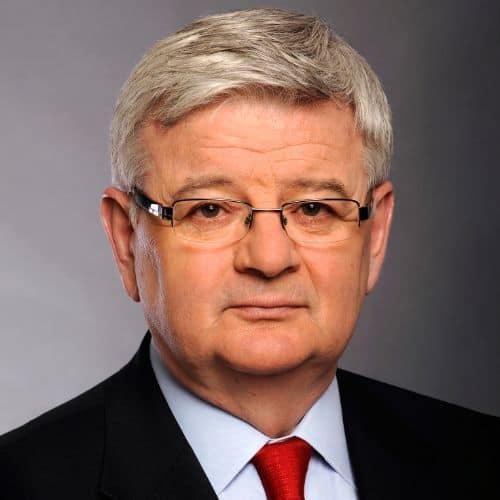 Joschka Fischer Germany’s Former Foreign Minister and Vice-Chancellor and leading political figure and expert in current affairs and crisis management. Greatly admired for his personal integrity, charisma, leadership and outstanding oratory qualities, he is one of the most requested political speakers across the globe.

Joschka Fischer is the former Vice Chancellor and Foreign Minister of Germany (1998-2005). He delivered the Green Party to the centre of German politics, leading its first participation in government, both at the state level (Hesse) and federal level.

Fischer’s tenure as Foreign Minister was a significant period in the history of German foreign affairs. He oversaw Germany’s first post WW2 active military mission in the Kosovo War and the deployment of German troops joining the NATO intervention in Afghanistan. Fischer was a leading voice in his Government’s critical stance on the war in Iraq. In 2003, with the Foreign Ministers of France and the UK (Jack Straw), he led the EU3 negotiations with Iran, regarding its nuclear program.

In 1994, Fischer entered federal politics and became co-chairman of the Green Party’s federal parliamentary group, prior to joining Schröder’s cabinet in 1998.

After leaving politics in 2005, he was a senior fellow at the Liechtenstein Institute on Self-Determination, and a visiting professor at Woodrow Wilson School of Public and International Affairs, at Princeton University. He remains active in international foreign affairs, and since 2008 has been a Senior Strategic Counsel of the Albright Group. He is also a member of the Spinelli Group, serves on the Board of the International Crisis Group, and is co-Chair of the European Council on Foreign Relations.