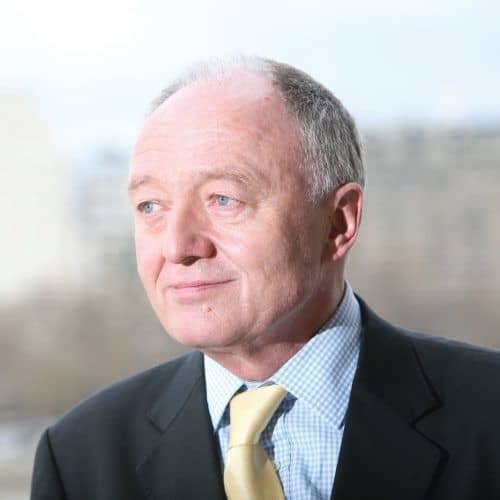 Known to most for his role as the Mayor of London

Known to most for his former role as the Mayor of London, Ken Livingstone’s character and achievements have cemented his place in political history

"You Can't Say That: Memoirs: A portrait of one of the most fascinating characters in British politics today."

"You Can't Say That: Memoirs: Thoroughly entertaining and sharply amusing."

"You Can't Say That: Memoirs: Thirty years on, Red Ken is still standing, having given the Thatcher government a bloody nose, faced down Tony Blair and emerged once again to contest the capital."

Ken Livingstone is best known for his work with the Labour Party and as Mayor of London. For his role in London’s bid for the 2012 Olympics, Livingstone was offered a CBE, but he famously turned this award down as he does not believe that politicians should receive honours. Unafraid of courting controversy, Livingstone has taken on the role of a straight-talking advisor and speaker, drawing on his extensive political experience.

Ken Livingstone is an experienced politician who has been unafraid to speak his mind. He is articulate and entertaining, balancing humour, anecdote and information in a manner which educates and intrigues listeners from all sectors.

Ken Livingstone was born in Lambeth, London on the 17th of June 1947 into a working class family. His parents were Tories, though they were relatively modern in many of their views, making an impression on their young son with their tolerant attitudes. Despite his family being Anglican, Livingstone decided to become an atheist at the age of eleven. Since Livingstone failed his 11-Plus examination, he was unable to go to a grammar school and instead attended Tulse Hill Comprehensive School. A shy student who was bullied, Livingston became interested in politics during classroom debates on current affairs. The election of Pope John XXIII and of the US president in 1960, further peaked Livingstones interest, and he was soon avidly following politics. He left school at 15.

His early career saw Livingstone take a very active role in union activities, helping to fight workplace injustices and to fight redundancies. Travels abroad further shaped his political beliefs and he soon began taking a more active role in politics. In 1968, Livingstone joined the Labour Party, despite the fact many of their left-wing supporters were critical of their policies regarding the NHS, trade unions and their stance on the Vietnam War. He felt that despite these issues, the party was still in the best position to change the UK for the better in the future. At his local branch of Labour in Norwood, he soon became secretary and chair of Norwood Young Socialists and began to sit on the local government committee.

In 1981, Livingstone went from being a member of the Greater London Council (GLC) to being its leader. In this role he sought to improve the costs of public transport in the capital his Fares Fair policy was successful and highly popular. The GLC was abolished by the conservative government in 1985 and Livingston went on to become a Labour MP.

In 2000, he stood as an independent candidate (a move which saw him leave the Labour Party) for the newly created role of Mayor of London and won. During his time as mayor, Livingstone helped to introduce the controversial congestion charge but was forced to concede to Labour regarding part-privatisation of the London Underground.

In 2004, Livingstone re-joined the Labour Party and stood as their London mayoral candidate, once again winning the public vote and taking another term as Mayor of London. During his time as Mayor, he took an active role in securing the 2012 Olympic Games for the UK capital. The mayoral elections in 2008 were closely run, with Livingstone up against the Conservative Boris Johnson. Despite early indicators showing the vote could go either way, Johnson emerged victorious and Livingstone did not win his third term. Now utilising his political experience to help others, Livingstone has become an influential and popular speaker who works with organisations in a variety of sectors.