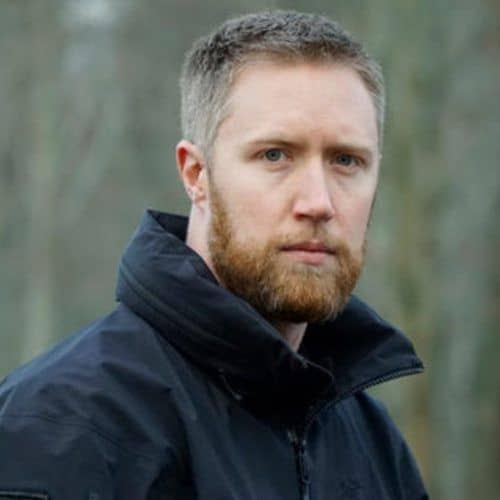 "Your presentation had a real impact on us all - a mixture of admiration and humility mixed with some great practical performance advice in our commercial world. Whilst there's clearly no real comparison with your experiences and what we do day to day, the feedback from our guys was that you drew out parallels we can apply; exactly the impact we were looking for."

Lloyd joined the British Army at 18 and was commissioned from the world-renowned, Royal Military Academy Sandhurst as the youngest serving Army officer.

After hanging up his tools, Lloyd moved to the corporate world of defence procurement as the military advisor to the MOD’s Special Projects Search and Countermeasures delivery team and was the technical lead for the development and procurement of bespoke equipment solutions for specialist users; in particular a £50+ million pound project in defence robotics. Later Lloyd founded Five Three Alpha Ltd as an independent consultancy to the defence engineering industry focusing on product development and integration.

Framed within the fascinating world of bomb disposal Lloyd delivers a unique yet relatable insight into the mind and experiences of a Special Forces Bomb Disposal Operator. His honest and frank speaking style draws unlikely comparisons between seemingly unconnected worlds analysing the criticality of decision making, individual and team performance under unrelenting pressure and the impact it has on leaders, teams and the individuals.

An insight to the mind of a Special Forces Bomb Disposal Operator, the art of autonomous decision making and high performance in the most hostile of situations. ‘Extreme Decisions’ addresses the individual, emotional and organisational factors that facilitate effective and critical decision making.

Leadership - Towards the bomb

Have you ever considered what it takes to inspire a team, days from returning home from 6 months in Afghanistan, to walk into a known ambush in order to find and render safe a remote controlled anti-vehicle bomb? For over a decade and a half I studied, practiced, experienced and lived leadership. I learnt from the successes and mistakes of others and learned even more from my own. ‘Outstanding Leadership’ is the honest account of leadership in organisations as large as the British Army and as small as a Special Forces team.

Critical Thinking - Inside the mind of a bomb maker

What does it really take to think your way around the traps and triggers of an unbeatable terrorist bomb; a problem that seems obviously mechanical and yet is as intrinsically human as a game of chess? ‘Critical thinking’ challenges every belief and assumption, it simplifies the complex and orders the chaotic allowing ordinary people to develop extraordinary solutions to complex problems.

Risk - How to put your life on the line

Defusing a bomb is, at it’s most simple, a process of understanding, prioritising and balancing risks but when the reward is to do it all again tomorrow and the consequences are at best death and at worst unimaginable, nothing is as simple as risk vs reward. ‘Handling Risk’ follows the mental processes, mindset and techniques employed by Bomb Disposal experts and Special Forces personnel that changes how they view, assess and respond to risk. It looks at the human elements of how they cope and are able to perform in such high consequence situations.