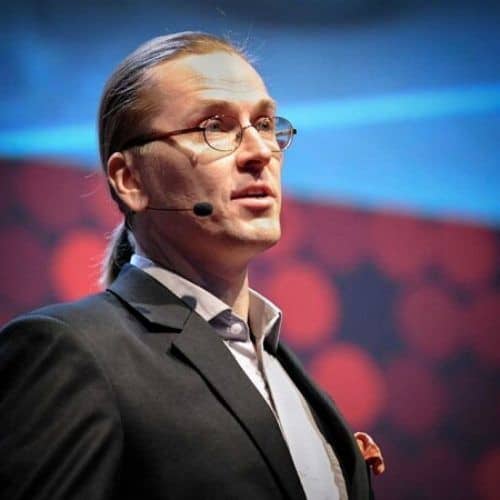 Mikko Hypponen is an author, security expert, writer, speaker and the Chief Research Officer of F-Secure. He is also a board member on the Nordic Business Forum and a member of the T2 advisory board.

"Mikko exhibits a remarkable capacity to make complex technical concepts easy to understand, uncoupling the relevant from the mere buzz, and bringing notable anecdotes and first-hand accounts to his storytelling."

"We organized an event where Mikko made a presentation to a diverse group of 400 senior executives. He was extremely engaging and informative. His presentation was a nice blend of the latest facts and informed predictions delivered in an entertaining style. I would highly recommend Mikko for an enlightening look at the latest trends on cybersecurity."

"Mikko made us think and he made us laugh. As a speaker, he was very knowledgeable and inspirational. He made us hope that the talk wouldn’t end just yet!"

He is widely known for his “Hypponen Law” about the internet of things (IoT) security. Mikko has assisted law enforcement in the US, Europe and Asia since the 1990s on cybercrime cases and also advises governments regarding cyber crime.

His expert research has been featured in high profile publications including the New York Times, Wired and Scientific America. He frequently appears on international TV and has given talks at Stanford, Oxford and Cambridge Universities.

He also known for presenting the most watched online security TED Talk on the internet, watched 1.5 million times and translated into forty languages. He has given hundreds of media interviews globally including a nine page profile in Vanity Fair.

He was selected among the fifty most important people on the internet by PC World magazine and was included in the FP Global 100 Thinkers list.

As a speaker, he has delivered hundreds of talks and presentations on over forty countries at conferences Worldwide including Black Hat, DEF CON, DLD and RSA. Additionally Mikko has given talks at high profile events such as TED, TEDx, DLD, SXSW and Google Zeitgeist.

It’s been 25 years since the first PC virus (Brain A) hit the net, and what was once an annoyance has become a sophisticated tool for crime and espionage. Computer security expert Mikko Hyppönen tells us how we can stop these new viruses from threatening the internet as we know it.

Cybercrime expert Mikko Hypponen talks us through three types of online attack on our privacy and data — and only two are considered crimes. “Do we blindly trust any future government? Because any right we give away, we give away for good.”

How the NSA Betrayed the World's Trust - Time to Act

Recent events have highlighted, underlined and bolded the fact that the United States is performing blanket surveillance on any foreigner whose data passes through an American entity — whether they are suspected of wrongdoing or not. This means that, essentially, every international user of the internet is being watched, says Mikko Hypponen. An important rant, wrapped with a plea: to find alternative solutions to using American companies for the world’s information needs.