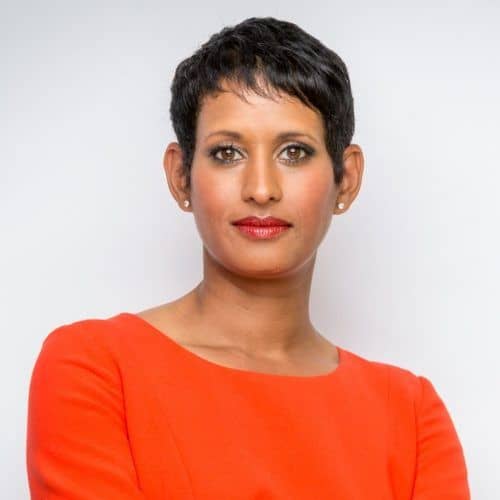 Naga Munchetty is known nationwide as a high profile journalist and broadcaster.

"Naga was an absolute joy to work with at Mind’s recent event on the subject of loneliness and we are so grateful that she very generously donated her time to supporting the charity. Naga chaired our panel of mental health experts and people with lived experience with utter professionalism and sensitivity, and even managed to provide the attendees with a few moments of light relief in between discussing some very serious and emotional topics. Many of the guests emailed us with brilliant feedback the morning after the event and Naga’s contribution on the night was without doubt fundamental to this. We would be delighted to have Naga’s support again in the future."

"Thank you for your outstanding performance during the Forum. You did a wonderful job moderating panels that dealt with technical and not always easy topics. You made the panellists feel very comfortable on stage, you managed to keep the audience interested and us in the back relaxed and assured that everything would go well. Your positive spirit, uncomplicated and friendly nature were highly appreciated!"

"It was a privilege to have you host the event, and your smiley, friendly but professional demeanour was just what we needed. I knew the joke about Alvaro Quiros would go down well! The audience really enjoyed your speech, and it hit the tone just right. Several guests emailed after the event with compliments, and quite few people commented on how fresh you looked on BBC Breakfast the following day!"

"Naga Munchetty is one of the coolest-headed charismatic professional broadcast presenters available today. Presenting to an international audience of aviation specialists in Munich she simply wowed the crowd with consummate presentation skills and the minimum of fuss. She has a natural ability to bring the best out of people live on stage and brings a warmth and humour to proceedings that is simply unique. She also has a real instinct for spotting a story. I would not hesitate in recommending her for major events. We will certainly be having her back."

"She was flexible and approachable, she removed any stress, her intro was well informed and funny, she was a delight."

"She was fabulous, everything we can ask for, she was so committed with the cause and the night. We can't say enough thank you to her!"

"You were amazing. We were over the moon with how you delivered the stage presentations and thanks for all the scripting you were involved in, not to mention playing golf with us afterwards."

She is currently one of the main presenters for BBC Breakfast and can be seen on the famous red sofa every week. Naga is also recognised by viewers of BBC Newsnight, having presented the show on numerous occasions

In addition to her television work, Naga is a familiar voice on BBC Radio 4’s PM, Moneybox and Pick of the Week.

Her career as a journalist began at the Evening Standard and The Observer newspapers and soon moved into reporting for Reuters Financial Television. Her love of financial matters, news and television led her to CNBC Europe where she became an Executive Producer. She has also worked as a Producer and Reporter for Channel 4 News, before becoming an anchor for Bloomberg Television. There she fronted a daily show and regularly grilled major CEOs and Central Bankers. In 2008 Naga moved to the BBC to front BBC2’s Working Lunch and subsequently the European Breakfast programme for BBC World News.

Golf is one of Naga’s passions and she plays as much as she can, she plays off a handicap of 8. In 2013, Naga was crowned the winner of Celebrity Mastermind on the subject of The Ryder Cup – she answered every question correctly on her pet subject.

In 2014, she was named by the Asian Power List as one of the UK’s most powerful Asian females. In 2018, she collected ‘the ‘Media Personality of the Year’ award at the Asian Media Awards.

Naga is a supporter of many charities and causes close to her heart, including mental health, education, women’s rights and animal welfare.

She is always keen to combine a love of sport with taking on fresh challenges – she ran the 2013 London Marathon and in 2015 took to two wheels completing the Women V Cancer Ride The Night 100km cycling ride. Naga recently returned to the saddle completing a gruelling London to Paris bike ride and the 100 mile Prudential Ride London event.

Naga was one of the judges for The Baileys Women’s Prize for Fiction, 2016, and in the same year, she was a celebrity contestant on BBC’s Strictly Come Dancing. In 2018, she collected ‘the ‘Media Personality of the Year’ award at the Asian Media Awards.

In 2021, Naga made her debut as the host of the mid-morning programme on BBC Radio 5 Live.

She is an excellent moderator, host and presenter. As a seasoned and tenacious journalist and broadcaster, she is comfortable in all circumstances. One of her key skills is the ability to put audiences and interviewees at ease with her level-headed, considered, meticulous and thoughtful manner.

As an interviewer, host or presenter Naga is a safe pair of hands who will work closely with organisers to bring the best out of any event.