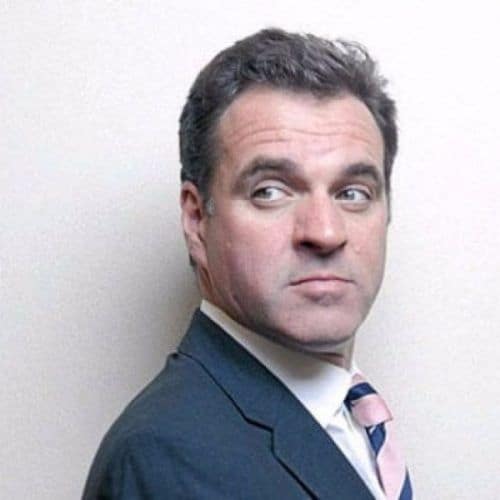 An academic and TV historian with a flair for popular history

Ferguson is a challenging thinker often taking counterfactuals as his starting point – the what if questions that lead you to look at issues from unexpected angles, his most famous being, what would have happened if Germany had won the First World War?

"A masterpiece ... a pulsing energy suffuses his account and fascinating facts burst like fireworks on every page"

"His grasp of economic history is admired even by critics"

Niall Ferguson is one of Britain’s most renowned historians. He is Laurence A. Tisch Professor of History at Harvard University, a Senior Research Fellow of Jesus College, Oxford and a Senior Fellow of the Hoover Institution, Stanford University. He is the bestselling author of Paper and Iron, The House of Rothschild, The Pity of War, The Cash Nexus, Empire, Colossus, The War of the World and The Ascent of Money. He also writes regularly for newspapers and magazines all over the world.

Niall Ferguson was born in Glasgow, Scotland in 1964 and was educated at the private Glasgow Academy. He graduated with a first from Magdalen College, Oxford in 1985. After spells studying in Hamburg, Berlin and Cambridge he returned to Oxford as a tutor in modern history in 1992. In 2000, he was appointed Professor of Political and Financial History. He left for America in 2002 taking up first a position at the Stern Business School and then at Harvard in 2004. Unusually for an historian, Professor Ferguson teaches at both Harvard University and the Harvard Business School where he is Professor of History and Business Administration respectively. He maintains links with Oxford and is also a Senior Fellow of the Hoover Institution at Stanford University

He has written 16 books, often with accompanying TV series. He wrote his first book in 1995 – ‘Paper and Iron: Hamburg Business and German Politics in the Era of Inflation 1897-1927’ which was short-listed for the History Today Book of the Year award. In 1998 came ‘The Pity of War: Explaining World War One’ and in 2001 he published ‘The Cash Nexus: Money and Power in the Modern World, 1700-2000’.

In 2003, ‘Empire: The Rise and Demise of the British World Order and the Lessons for Global Power’ was a best seller on both sides of the Atlantic and was accompanied by a six-part TV history for Channel 4. It was followed by a book about the Rise and Fall of the American Empire in 2004.

In 2008 his book and TV series, ‘The Ascent of Money: A Financial History of the World’ really raised his standing as a leading business thinker and he was awarded the International Emmy for Best Documentary. He believes chief executives can learn a great deal from history – about leadership and the analysis of past events. He has written biographies of banker Siegmund Warburg, the House of Rothschild and a life of Henry Kissinger.

His latest book ‘The West and the Rest’ has been seen by some as an apology for colonialism, explaining the dominance of the west through what he calls its “killer apps” competition, science, democracy, medicine, consumerism and the Protestant work ethic.

He is a regular commentator on current affairs in both Britain and America and in 2012 he cause widespread controversy when he penned a Newsweek article critical of Barack Obama. He is also a regular contributing editor at the Financial Times.

Ferguson was an advisor to the John McCain U.S. presidential campaign in 2008, and announced his support for Mitt Romney in 2012.

In 2012 he was given the honour of delivering the prestigious BBC Reith Lectures: a chance for one thinker to give a series of 4 broadcast talks – one of which was about the global financial crisis.

In 2004 Time magazine named him as one of the world’s hundred most influential people.

Ferguson is also visiting professor at AC Grayling’s private university college, the New College of the Humanities in London and has advised the British government on the teaching of history.

He has carried out consultancy work for the UK-based hedge fund GLG.

He is married to Somali-born feminist Ayaan Hirsi Ali.

Current / past roles and positions

Experienced and engaging with a catchy style and strong ideas, Niall Ferguson has impressed audiences with his accessible approach to history via his prolific TV work.

Globalization: Past, Present and Possible Futures

The Great Depression 2.0: The Credit Crunch in Historical Perspective

Are Capitalism and Democracy Bound to Win?

The Ascent and Descent of Money: What Went Wrong with Western Finance?

The Lives and Time of Siegmund Warburg