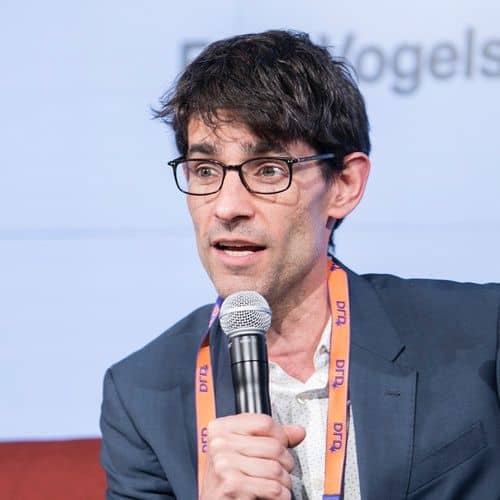 Editor in chief of Wired and former editor of newyorker.com

Nicholas Thompson is the editor-in-chief of Wired magazine, where he served previously as senior editor from 2005–2010. There, he edited both National Magazine Award-nominated writing and “The Great Escape,” the story that became the feature film, Argo.

"Your speech was extraordinarily well received and your moderation of the panel was done with great skill. The conversations that followed amongst our senior leadership during the rest of the day's programming proved that the experience was invaluable for everyone in our organization."

"Aside from organizing the call, I wanted to thank you for your time at the conference. Your presentation added to our day, making it full of interesting discussion and topics."

"I am fairly certain that was one of the most interesting sponsored events ever. You gave even those of us who are deep into these issues much more to think (and worry) about. Every single client, all of whom deal with these issues on a daily basis, are still talking about your presentation and the importance of understanding the quality of data and potential biases that go into A.I. in the first place. Thank you!"

Thompson has also played a pivotal role with The New Yorker—first as senior editor, then as editor of the magazine’s digital platform, where he helped re-design the website, launch the New Yorker app, spark an eight-fold increase in monthly readers, and quadruple the number of new digital subscribers each month (based on his editorial focus on offering loyalty to writers, diversifying the magazine’s social media presence, and publishing “more, better stories”).

He is also the author of the critically acclaimed biography The Hawk and the Dove: Paul Nitze, George Kennan, and the History of the Cold War.

Earlier in his career, Thompson worked as a Senior Editor at Legal Affairs, as an editor at the Washington Monthly, and co-founded The Atavist, the National Magazine Award-winning publishing company. He has written on technology and politics for The New York Times, The Washington Post, The Boston Globe, the Los Angeles Times, Slate, Foreign Policy, The New Republic, The New York Observer, and other publications. He has appeared on Bloomberg TV, NBC, Fox News, MSNBC, ABC, NPR, and CNN, where he is a contributing editor, and CBS, where he is a news contributor.

Thompson earned the 21st Century Leader Award from The National Committee on American Foreign Policy, was a Future Tense Fellow at the New America Foundation, and is a member of the Council on Foreign Relations. He graduated from Stanford University, where he was a United States Truman Scholar.

The future of warfare