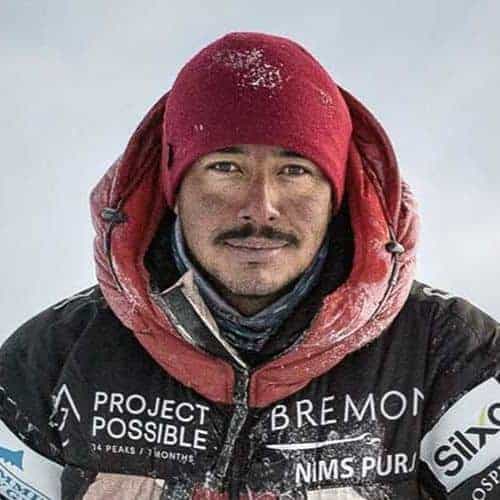 An elite soldier, a mountaineer, a life in the death zone

Nirmal Purja (known as Nims or Nimsdai) was born in Nepal, Nims had a distinguished 16-year military career, of which he spent 6 years as a Ghurka and 10 years with the UK Special Forces (SBS). He has since become a truly historic mountaineer, accumulating an ever-growing list of record-breaking summits alongside many high-altitude rescue missions.

Astonishingly, Nims didn’t grow up in the shadow of the Himalayas, in fact he was born in the Dhaulagiri region of Nepal and raised in Chitwan, in the country’s flatlands. He performed well at school, but at that time there was no yearning to climb mountains instead he had another focus, to become a Gurkha in the British military like his father and brothers before him. In 2003 that dream became a reality when he joined the Gurkhas in 2003, at the age of eighteen.

Never shy of pushing himself to another level #alwaysalittlehigher, six years later in 2009 he became the first ever Gurkha to join the UK Special Boat Service (SBS). The unit is predominantly made up of Royal Marines Commandos, and specialises in classified undercover raids. Along with the SAS, the SBS is regarded as the most elite unit in the British military.

During this time, he developed an interest in mountaineering that quickly turned into a passion. It all began in December 2012, when on leave from his Special Forces duties, he set out on a trek to Everest Base Camp. This experience fired his passion and ambition for the mountains immediately, and not content with simply returning to Kathmandu, he managed to convince his guide to teach him how to climb ‘for real’ and he successfully summited the 6119-metre Lobuche East with his guide shortly after. It was his first peak.

His primary focus and loyalty remained with his unit carrying out many tours and operations eventually leading to a role where he was subject matter expert for extreme cold-weather warfare within the mountain cell of the SBS. It was throughout this military chapter of his life where he developed the skills to quickly evaluate situations, then act to ensure the welfare of others balanced with delivering on the ultimate objective. An invaluable skillset that would transfer directly across to his climbing career.

As and when his military career allowed, the mountaineering continued.

His #alwaysalittlehigher mindset would be a driving force to further climbs around the world, and eventually leading him towards his first ascent of Everest. This achievement was marked even more admirably with a selfless act of solo rescueing a stricken climber during the descent high in the death zone. It was at this moment Nims made the decision to always climb with Oxygen from the higher camps to ensure he would be at his strongest to assist others. The following year he proudly led a team of Gurkhas to their first successful Everest expedition. Immediately after, he made his way back up to the mountain this time with his sights set firmly set on a World Record.

Just a few days later he achieved his goal after summiting Everest, quickly followed by Lhotse and Makalu all within a total of just 5 days. It was to be the first of many records he would claim in the mountains.

He had soon discovered a natural physiological advantage – quickly realising he was able to climb and acclimatise to altitude quicker than most mountaineers, this newfound awareness naturally fuelled even greater ambition. He had served in the British tier one Special Force’s unit (SBS) for ten years, when he took the decision to leave in early 2019 to pursue a dream, a project so ambitious, nobody thought it possible.

At the time the record for climbing the world’s fourteen highest peaks (the 8000ers) was just under eight years. Nim’s dream was to do it in seven months, he aptly named it Project Possible. He would embark on it, as he had done for the rest of his life, through all the planning, every storm, every step on every mountain, each selfless rescue mission he answered with just one approach ‘Everything in life is possible armed only with a determined approach and positive mindset’. A little over six months later on the summit of Shishapangma and with weeks to spare, Nims proudly announced to the world ‘Mission Achieved’ delivering on his promise and what many claimed to be ‘impossible’.

His natural aptitude for expedition leadership and high-altitude mountaineering had come to full maturity, truly proving his abilities on the world stage. Above all, he clearly demonstrated that with the right mindset, planning and team all things are possible. He has been inspiring people of all ages, showing how a positive approach can lead to the most incredible achievements in life.

In March 2020 he officially announced his new enterprise ‘Nimsdai’– from the Nepalese ‘dai’, meaning ‘brother’. With a primary objective to share his knowledge and approach of big mountain climbing, he now offers mountaineers the exclusive chance to team up 1:1 with one of the most ground-breaking expedition leaders of a generation and provide commercial clients opportunities for breath-taking high-altitude special projects.

Failure is the route to success

Stay true to your vision without overlooking the risks