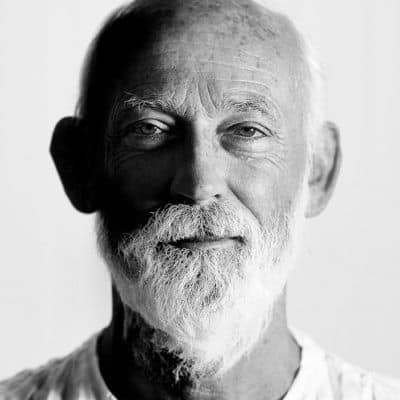 Known as “Captain Organic,” Ross Lovegrove embraces nature as the inspiration for his “fat-free” design. Each object he creates — be it bottle, chair, staircase or car — is reduced to its essential elements. His pieces offer minimal forms of maximum beauty.

"Lovegrove's specialty is in qualifying the present moment in design, rather than restyling the past, by employing new technologies with new materials to define new shapes."

Ross Lovegrove is a designer and visionary who’s work is considered to be at the very apex of stimulating a profound change in the physicality of our three dimensional world.

Inspired by the logic and beauty of nature his design possess a trinity between technology, materials science and intelligent organic form, creating what many industrial leaders see as the new aesthetic expression for the 21st Century. There is always embedded a deeply human and resourceful approach in his designs, which project an optimism, and innovative vitality in everything he touches from cameras to cars to trains, aviation and architecture.

In the early 80’s he worked as a designer for Frog Design in West Germany on projects such as Walkmans for Sony, Computers for Apple Computers and then later moved to Paris as consultant to Knoll International. He is author of the highly successful Alessandri Office System.

He was invited to join the Atelier de Nimes along with Jean Nouvel and Phillipe Stark, consulting to amongst others Cacharel, Louis Vuitton, Hermes and Dupont.

Winner of numerous international awards his work has been extensively published and exhibited internationally including the Museum of Modern Art in New York, the Guggenheim Museum NY, Axis Centre Japan, Pompidou Centre, Paris and the Design Museum, London, when in 1993 he curated the first permanent collection. His work is held in permanent collections of various design museums around the world including Museum of Modern Art in New York (MOMA), Design Museum in London and Vitra Design Museum Weil Am Rhein, Basel, CH..

His work has been shown in many exhibitions around the world.