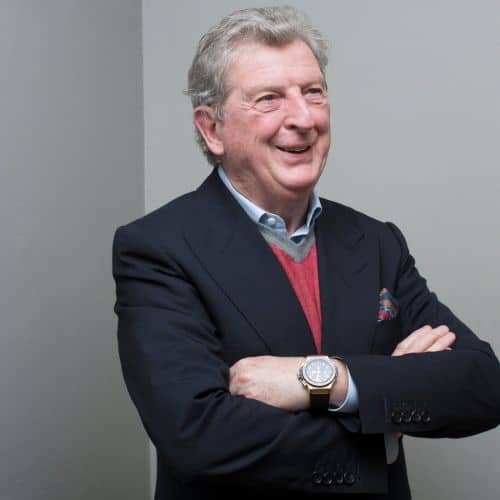 Footballing legend, Roy Hodgson, is the former England manager and professional player, who currently fronts Premier League sides. Having spent over five decades in the sporting spotlight, Hodgson is one of the most iconic football managers the sport has ever seen, and his success of managing sixteen teams across eight countries, proves he is unparalleled in leadership. An instantly recognisable figure in the industry, Hodgson has been pitch side for historical tournaments, and shares his first hand experiences as an entertaining, and captivating after dinner speaker.

Having been a youth player at Crystal Palace, Roy spent the rest of his playing days in non-league football before beginning his managerial career in 1976.

Throughout his career, Roy managed 16 different teams in eight countries, beginning in Sweden with Halmstads BK in the 1976 season.

He later guided the Switzerland national team to the last 16 of the 1994 World Cup and qualification for Euro 1996; Switzerland had not qualified for a major tournament since the 1960s.

From 2006 to 2007, he managed the Finland national team, guiding them to their highest-ever FIFA ranking of 33rd place and coming close to qualifying for a major tournament for the first time in their history.

He managed the England national team from 2012 to 2016, taking the England job shortly before Euro 2012. ‘Roy’s England’ won all 10 matches in qualifying for Euro 2016, but he stepped down after a 2-1 last-16 defeat by Iceland left him with a record of three victories from 11 games in major tournaments.

Other clubs that Roy has managed include Inter Milan, Malmö FF, Grasshoppers, FC Copenhagen, and Udinese. He has also been in charge of Blackburn Rovers, Liverpool, West Bromwich Albion, Fulham and, most recently, Crystal Palace, in the Premier League; guiding the Cottagers to the Europa League final in 2010. As of the end of the 2021 football season, Roy will step down from managing Crystal Palace, to retire from football.

Roy speaks five languages and has worked as a television pundit in several of the countries in which he has coached.

Hodgson was made a Knight, First Class, of the Order of the Lion of Finland in September 2012. He received an Honorary Doctorate from the University of York on 22 January 2016 and is an alumnus of the University of Greenwich, having graduated from Avery Hill College in 1972 with a Cert ED.

In 2018 Hodgson was made a Freeman of the Borough of Croydon.