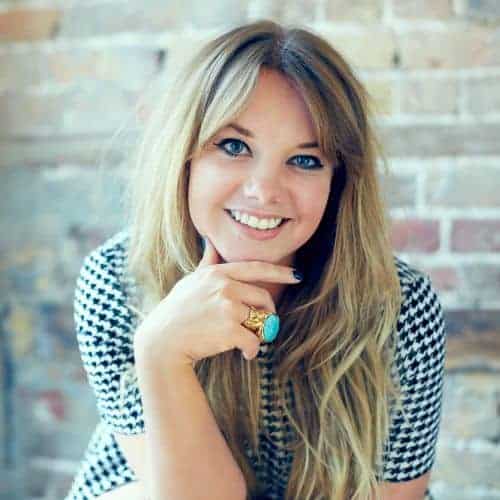 Goldierocks, AKA Sam Hall, is an international DJ and broadcaster with a celebrity following that includes Madonna, Giorgio Armani, Richard Branson and Jade Jagger (she’s performed exclusively for them all). Until 2019 Sam hosted The Selector, a radio show which was heard in 44 countries across the world, including such diverse places as Palestine, Russia and Vietnam. With an audience of 4.3m religiously tuning in every week, her show was hailed by The Sunday Times as “the most cutting-edge British music show out there.”

"An absolute delight to work with. No one rocks a party like Goldierocks."

"She could be the most influential woman in pop."

"Stunning and she smashed it."

"Festival it girl, touring DJ and international party know all."

As well as radio, Sam performs at endless festivals worldwide including Bestival, Secret Garden Party, Latitude, Ibiza Rocks, Burning Man and Lake of Stars to name a mere handful. Then, more unusual venues might be Soviet bunkers in Kazakhstan, inside igloo discos in Austria and on slightly more luxurious super yachts in Monaco. In 2014, she had the opportunity to DJ in Cuba becoming the first ever female DJ from overseas allowed to perform there.

In 2012 Sam had the honour of performing a 90 minute set at the London Paralympic Games Opening Ceremony which was televised on C4. With a crowd of 80,000 people with millions watching at home, it was one of many career highlights for Ms Hall.

In 2012, Sam flew to Egypt shortly after the Mubarak demonstrations to record her radio show and meet other musicians, DJs and young people with broadcast career aspirations. She often visits countries in conflict to work with young people, community projects and to launch ‘The Selector’. In 2013 Sam flew to Libya to work with the Youth Forum in Tripoli, the first international culture correspondent to visit the country since the fall of Gidaffi. In 2014 she travelled to Jordan with the charity Oxfam to visit Zataari, the second largest refugee camp in the world. Experiencing first-hand the lack of amenities and desperate need for aid, Sam created her first radio documentary with interviews and reports from her trip, stirring up public awareness and drumming up extra support for Oxfam’s Syria Crisis campaign.

A practiced and fluent writer. Sam is a monthly columinist for DJ Mag, contributing writer for style & culture publication Phoenix, a regular blogger for Mixmag & Ministry of Sound.

An experienced and adaptable TV presenter, Sam is just as comfortable in a classic studio environment as she is as a roving reporter at festivals. Having been an anchor for 4Music fronting series like ‘BOOM TV’ and ‘Pop Up Pop Quiz’. She’s travelled the UK with the likes of Last FM, Xbox, and Reebok to host their festival coverage. She can confidently move from red carpet coverage to unique online content to factual film. Having hosted the official coverage for Brits.co.uk multiple years in a row, been an anchor for YouTube’s original content program ‘Fash Tag’ and filmed three series of the online show Red Bull Bedroom Jam, as well as fronting BBC2’s ‘Your Body: You Image’ documentary.

Sam held her own on BBC2’s ‘Newsnight’ discussing the demise of the UK Chart Show.

With years of DJ experience and a theatre degree from Goldsmith’s university behind her, Sam is known for her theatrical flair as well as her cutting-edge playlists. She has stage dived, rocked out and propelled herself off various stages around the globe having DJ’d her unique blend of eclectic house, world beats, mash up electro & bass heavy remixes to thousands across five continents. She continues to pave the way for female DJ’s and females in broadcasting- being an avid spokes person for equal rights and at the forefront of groups like Sound Women, as a mentor for the Student Radio Association & National Prison Radio Network. It’s no wonder that the Evening Standard says of her ‘…she could be the most influential woman in pop’.