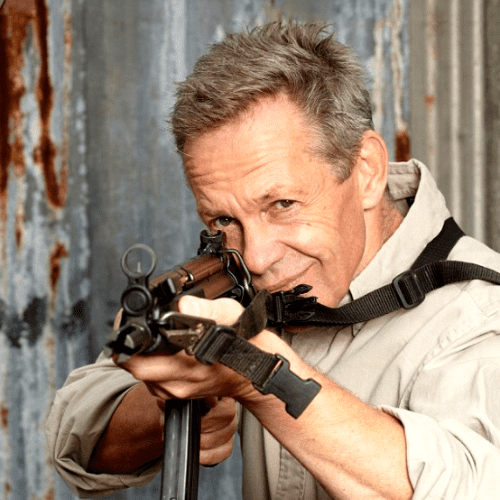 Captain Simon Mann, schooled at Eton, saw action in the Scots Guards and the SAS, in operations in Northern Ireland and elsewhere. He served a total of ten years.

"A fascinating character who has led the richest of lives. His justification for what he does is riddled with moral dilemmas but it provokes huge interest and debate. I found Simon one of the most interesting and inspiring after dinner speakers I’ve heard. He was so unassuming and candid… A fascinating man."

Having left the army, with qualifications in programming and Systems Analysis and Design, he started two IT businesses: in combat intelligence, and in electronic security. These took him to the Persian Gulf and to West Africa. Mann rejoined the British Army for the first Gulf War, joining the staff of General Sir Peter de la Billiere, for a further two years.

After that he briefly became an oil and gas exploration executive, until the Angolan guerrillas, UNITA, brutally plunged their country back into civil war.

In response, Mann and others formed Executive Outcomes (EO) and turned around the Angolan war, taking the MPLA government side, recognized by the UN as freely and fairly elected, to Victory.

Having also started DiamondWorks PLC, Mann and EO went on to win the Sierra Leone civil war, restoring that government and democracy in the process. DiamondWorks was listed on the Toronto Stock Exchange.

Mann and others also founded the company Sandline at this time, later to become well known for the Papua New Guinea army coup incident, and for the Arms to Sierra Leone scandal, one that resulted in the resignation of Robin Cook as Foreign Secretary.

Having built three diamond mines from scratch, two in Angola and one in Sierra Leone, on time and budget, Mann – in 1997 – retired from DiamondWorks to live in Cape Town . . .. . . only to re-emerge – in 2004 – as the leader of the notorious failed Coup d’Etat attempt against the President of Equatorial Guinea. West African dictatorship. Oil rich.

After five and a half years in two of Africa’s toughest prisons, Chikurubi Maximum Security, in Zimbabwe, and Black Beach, in Equatorial Guinea, Mann won a pardon. He had somehow survived those years, but then had to cope with the emotional adventure of returning home. November 2009.

After much third party writing and speculation, Mann is now ready to speak: about his life, about what he has learnt, and about what really happened in 2004. Mann is a highly accomplished keynote speaker and delivers riveting presentations on leadership, teamwork and strategy.