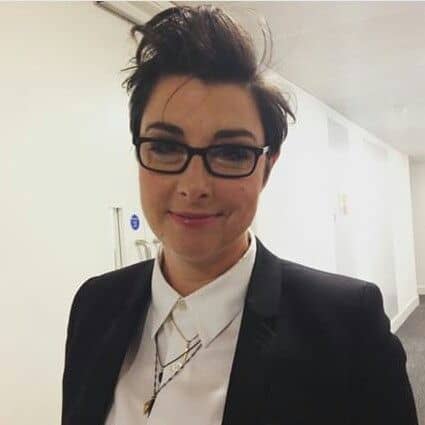 Sue Perkins is a comedian, writer and presenter. One half of comedy duo Mel and Sue, she has also presented a vast range of TV and radio programmes covering everything from brass bands to baking, from travelling to history, her new panel show Insert Name Here kicked off in 2016. In her talks, she offers a healthy serving of historical, comical and culinary tales.

"Sue Perkins was brilliant, very current, hilarious and really made the awards fun."

The quick-fire, self-deprecating wit of Sue Perkins has made her a household name and a firm favourite on British television.

Entertaining the nation for 16 years, Sue has presented programmes covering a vast host of topics including art, food, history, popular fiction (Sue is a big fan of ‘Game of Thrones’ and recently hosted Sky’s ‘Thronecast’, a review and discussion programme following the cult hit series), and of course travel.  Most recently her travels have included the hit BBC travelogue ‘The Ganges with Sue Perkins’ which followed the success of earlier BBC travel documentaries ‘Kolkata with Sue Perkins’ and ‘The Mekong River with Sue Perkins’.

Her career on television begun as one half of double act, Mel and Sue.  The pair first found fame on Channel Four’s daytime show ‘Light Lunch’, which ran for five series before transferring to an evening slot with the imaginatively titled ‘Late Lunch’.  The two continued to present together on the hugely popular ‘The Great British Bake Off’ whose 2015 series finale pulled in 13 million viewers (making it the most watched TV show of the year!).

2013 saw the premiere of Sue’s own sitcom ‘Heading Out’ on BBC 2, which she starred in, wrote and produced as a collaboration with her company Square Peg TV and Red Productions. This series followed ‘Climbed Every Mountain’, where Sue traced the story of the Von Trapp Family.

Some of Sue’s other presenting credits include three series of the BBC Panel show ‘Insert Name Here’, Sky1’s ‘The Big Spell’, three series of the Sky film show ‘Movie Babylon’,  and Radio 4’s ‘Dilemma’. She is also a regular contributor to ‘Have I Got News For You’ and ‘QI’ (BBC1), ‘Newsnight Review’ (BBC2), ‘Just a Minute’, and ‘The News Quiz’, (Radio 4).

Sue has also conducted ‘Last Night of the Proms’ after winning the BBC show “Maestro”, and has been crowned, officially, The World’s Greatest Liar in a hard-fought contest in a pub in Cumbria.

In 2015, she published her memoir ‘Spectacles’ which reached number one in the Sunday Times Best Seller List. She did two UK tours with a show about the book which culminated in her return to the Edinburgh Fringe Festival for a sellout run in 2017. In the same year, Sue hosted the BAFTAs gala ceremony, so the obvious next step in her awards hosting repertoire was to host the BTAs!

Hilarious, quick-witted and intelligent, Sue is the host to add charm and sparkle to all kinds of live events.