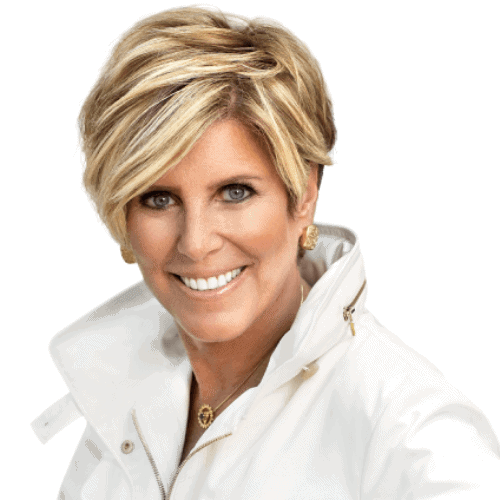 "We appreciate the time she spent with the students prior to her speech — I know it’s something the girls will not soon forget!"

"When Suze Orman took the stage, the audience was prepared for this energetic human equation comprised of equal parts tough-minded financial advisor tempered by tender-hearted social worker. Well-known as both Professor and Preacher of an unremitting mantra—People first; then Money; then Things—Orman educated as she exhorted the audience toward self-empowerment through financial self-knowledge. But who suspected that the true gift of her profession is her grace as a person? That “people first” stuff—she actually means it!"

"Suze was the best keynote speaker that we ever had. Her style of speaking was clear and down to earth, and all done without notes. We could have listened to her for the remainder of the afternoon, and it seemed like the hour flew by."

"Suze far exceeded our expectations as a speaker. She provided solid information and advice regarding women getting their financial houses in order, but she gave so much more than that. Her honest discussion of her own background and her determination to succeed was very inspirational and moving. I am sure that many who have dealt with adversity left her speech feeling even more resolved than ever to succeed."

"Suze is just amazing, and really covered all bases and spoke to the needs of our audience in a clear and concise way. It’s no wonder her book went so quickly to the bestseller list. Please let her know how very pleased all of us were with this event and how grateful we were for her taking the time out of her busy schedule to share her message of hope and inspiration."

Suze Orman has been called “a force in the world of personal finance” and a “one-woman financial advice powerhouse” by USA Today. A two-time Emmy Award-winning television host, New York Times mega bestselling author, magazine and online columnist, writer/producer, and one of the top motivational speakers in the world today, Orman is undeniably America’s most recognized expert on personal finance.

Orman was the contributing editor to “O” The Oprah Magazine for 16 years, the Costco Connection magazine for over 18 years, and hosted the award-winning Suze Orman Show, which aired every Saturday night on CNBC for 13 years. Over her television career Suze has accomplished that which no other television personality ever has before. Not only is she the single most successful fundraiser in the history of Public Television, but she has also garnered an unprecedented eight Gracie awards, more than anyone in the entire history of this prestigious award. The Gracies recognize the nation’s best radio, television, and cable programming for, by, and about women.

In March 2013, Forbes magazine awarded Suze a spot in the top 10 on a list of the most influential celebrities of 2013. In January 2013, The Television Academy Foundation’s Archive of American Television has honored Suze’s broadcast career accomplishments with her recent inclusion in its historic Emmy TV Legends interview collection.

In 2010, Orman was also honored with the Touchstone Award from Women in Cable Telecommunications, was named one of “The World’s 100 Most Powerful Women” by Forbes and was presented with an Honorary Doctor of Commercial Science degree from Bentley University. In that same month, Orman received the Gracie Allen Tribute Award from the American Women in Radio and Television (AWRT); the Gracie Allen Tribute Award is bestowed upon an individual who truly plays a key role in laying the foundation for future generations of women in the media.

In October 2009, Orman was the recipient of a Visionary Award from the Council for Economic Education for being a champion on economic empowerment. In July 2009, Forbes named Orman 18th on their list of The Most Influential Women In Media. In May 2009, Orman was presented with an honorary degree Doctor of Humane Letters from the University of Illinois. In May 2009 and May 2008, Time named Orman as one of the TIME 100, The World’s Most Influential People. In October 2008, Orman was the recipient of the National Equality Award from the Human Rights Campaign.

In April 2008, Orman was presented with the Amelia Earhart Award for her message of financial empowerment for women. Saturday Night Live has spoofed Suze six times during 2008-2011. In 2007, Business Week named Orman one of the top ten motivational speakers in the world—she was the ONLY woman on that list, thereby making her 2007’s top female motivational speaker in the world.

Orman who grew up on the South Side of Chicago earned a bachelor’s degree in social work at the University of Illinois and at the age of 30 was still a waitress making $400 a month.

Suze teaches practical, spiritual, and, above all, soundly financial ways to clear away financial clutter, break debilitating patterns, protect finances when entering into marriage or romantic partnerships, start over after a divorce or death, differentiate between good debt and bad debt, buy a home, invest safety and wisely, give generously and live richly, and learn and teach the value of money.

Are you in control of your money, or is it in control of you? Suze offers her own no-nonsense brand of advice on maneuvering your way through the confusion of credit, insurance, estate planning, IRAs and mutual funds. She explores the psychological, even spiritual, power that money has in our lives.

This presentation provides you with the practical answers to the questions we have been asking – or should have been asking: from creating a strong, debt-free foundation to amassing assets and protecting them in periods of economic downturn; from buying a home to providing for love ones; from investing with confidence and navigating the markets in good times and bad to securing reliable income for layer years.