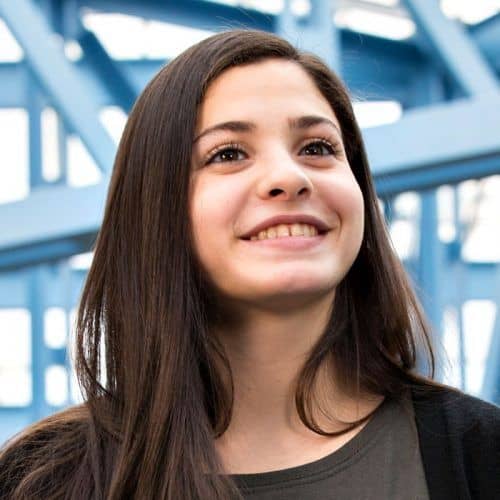 Since her selection for the Rio 2016 Olympic Games, 19-year-old Syrian refugee Yusra Mardini has worked closely with UNHCR.

Yusra was appointed as a UNHCR Goodwill Ambassador in April 2017.

Through her own compelling story and her inspiring performance as a member of the first-ever Refugee Olympic Team Yusra helps highlight the global refugee crisis. She is an example of the resilience and determination of the forcibly displaced to rebuild their lives and positively contribute to host communities.

Yusra fled Damascus with her sister, travelling through Lebanon and Turkey before trying to reach Greece by boat. When the motor failed, Yusra, her sister and two others jumped into the sea and swam for three and a half hours in open water to stop their dinghy from capsizing, saving the lives of 20 people. Eventually they reached the Greek island of Lesvos.

She now lives in Berlin but much of her extended family is still in Damascus, enduring life under very difficult circumstances. Yusra is still concerned with the situation at home in Syria. Her own experience of flight has made her determined to help focus the attention of the world on refugee issues.

Yusra has become a powerful voice for people across the globe who have been forced to flee their homes, speaking on some of the world’s largest stages including at the UN General Assembly in New York, at the 2017 World Economic Forum at Davos and Google Zeitgeist. She has addressed some of the world’s most influential people on refugee issues including President Obama, the Pope, Queen Rania of Jordan, Sheryl Sandberg of Facebook and she has been honoured with several awards.

She is determined to continue to build and develop her voice and skills as an advocate for the refugee cause and most recently has represented UNHCR at high level meetings in Japan.

“Since Rio I’ve been training hard but I’ve also been thinking a lot about what I can do to help refugees across the world. The most important thing in my life is swimming. Then speaking and doing things to help refugees.”