“I am a Trustee of The Seychelles Islands Foundation (SIF) a Trust with which Eden has been associated since we opened. The jewel in the crown is the extraordinary Island of Aldabra, often referred to as the Galapagos of the Indian Ocean.

Here, an island shaped like a giant bagel with a lagoon inside it so big you cannot see across it, is home to a huge array of seabirds and possibly the finest corals in the world. Here on an island the size of the Isle of Wight is the largest collection of giant tortoises in the world, over 100,000 of them, the endemic Flightless Rail and its prey the hairy coconut crab. Just 14 scientists live on a tiny part of the atoll, otherwise, no humans allowed.

We walk the beaches and 500 miles from the nearest inhabited island you walk among the flotsam and jetsam of people in India, Sri Lanka, Pakistan, the East Coast of Africa and stuff decanted from ocean liners many miles away. Here in paradise is a United Nations of trash.

Archaeologists of these flip flops and lighters, packing foam and straws and the full symphony of the plastic empire, will wonder how these islands could have supported such emigration. As a turtle digs her nest amid the rubbish I think of our friends at Oxford University creating a gang to come and carry out the wildest beach clean imaginable later this year joining with the charismatic young Seychellois whose passion for the environment matches ours,  and we are supporting it at Eden Project.

On Earth Day don’t despair, be hopeful in the idea that the world is waking up and a new muscular apolitical insistence is growing. Big change is coming!” 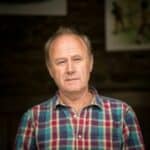