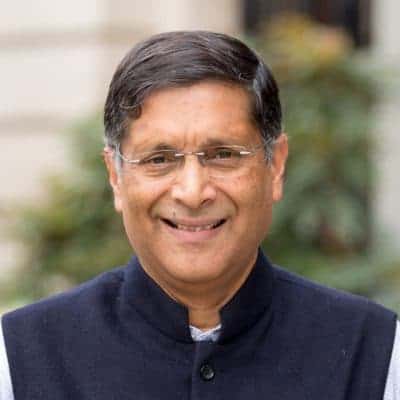 Chief economic advisor to the Government of India, former senior fellow jointly at the Peterson Institute for International Economics and the Center for Global Development

Arvind Subramanian is nonresident senior fellow at the Peterson Institute for International Economics and a visiting lecturer in public policy at Harvard University’s Kennedy School of Government. He rejoined the Institute in August 2018, following his service as the chief economic advisor to the government of India since October 2014.

Formerly an economist at the International Monetary Fund, he is a widely cited expert on the economics of India, China, and the changing balance of global economic power.

He was assistant director in the Research Department of the International Monetary Fund. He served at the GATT (1988–92) during the Uruguay Round of trade negotiations and taught at Harvard University’s Kennedy School of Government (1999–2000) and at Johns Hopkins’ School for Advanced International Studies (2008–10).

He has also published or been cited in leading magazines and newspapers, including the Economist, Financial Times, Washington Post, New York Times, Wall Street Journal, Newsweek, and New York Review of Books. He contributes frequently to the Financial Times and is a columnist in India’s leading financial daily, Business Standard.

He has authored a number of books, the latest of which is Of Counsel: The Challenges of the Modi-Jaitley Economy published in 2018.

Foreign Policy magazine has named him as one of the world’s top 100 global thinkers in 2011.

He obtained his undergraduate degree from St. Stephens College, Delhi; his MBA from the Indian Institute of Management at Ahmedabad, India; and his M.Phil and D.Phil from the University of Oxford, UK.

Eclipse: Living in the Shadow of China's Economic Dominance

Asia and the West