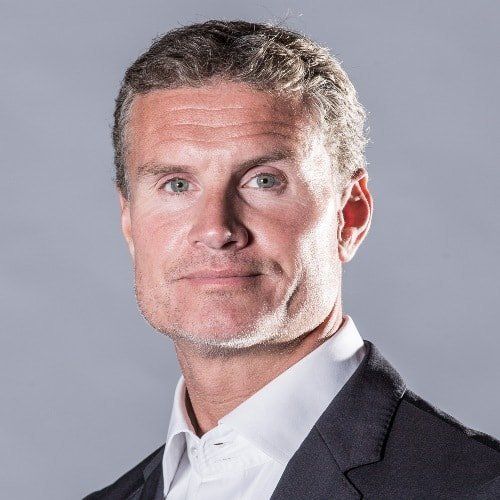 One of the world’s most widely recognised sports personalities, David Coulthard is a former Formula 1 Grand Prix driver, television broadcaster, author and entrepreneur.

"We were really pleased with David at the event. We have received a lot of positive feedback. His speech was exactly what we were looking for and his generosity with his time afterwards to interact with our clients was much appreciated. Thank you for your help with everything. I am sure we will work with you again in the future."

One of the world’s most widely recognised sports personalities, David Coulthard is a renowned Formula 1 Grand Prix driver, television broadcaster, author and entrepreneur.

Born in Twynholm, Scotland, David began racing karts at the age of 11 and achieved significant success in the lower formulae of motor racing. This included victory in the prestigious Macau Grand Prix. He won the inaugural McLaren Autosport ‘Young Driver of the Year Award’ in 1989, leading to a test drive for the McLaren Formula 1 team.

He joined the Williams Formula 1 team in 1993 as test driver, supporting Nigel Mansell, Alain Prost and Ayrton Senna in successive seasons. He made his Formula 1 World Championship debut for the team the following year, scoring his maiden victory at the 1995 Portuguese Grand Prix.

He then moved to McLaren for nine seasons where he enjoyed a series of stellar performances including winning a further 12 Grands Prix. He finished in the top 3 in the World Championship for Drivers on no fewer than 5 occasions. His Formula 1 victories included twice winning the prestigious British and Monaco Grands Prix.

In 2005 David joined the newly created Red Bull Racing team and played a key role in the team’s development, including bringing the team its first podium finish, at the 2006 Monaco Grand Prix. He stepped away from Formula 1 racing at the end of 2008, scoring his final podium finish in that year’s Canadian Grand Prix.

His business interests include co-founding Whisper, one of Europe’s fastest growing media production companies, and Velocity Experience which develops and produces branded corporate events. In 2019 David became non-Executive Chairman of W Series, the world’s first professional all-women single seater racing series, and he is President of the British Racing Drivers Club which owns and operates Silverstone Circuit in the UK.

David’s profile is underlined through ambassadorships for a number of major international brands. He continues to drive Red Bull’s F1 cars at promotional events and is cocommentator for Channel  4’s Formula 1 coverage in the UK. He often conducts the podium interviews with the top three  finishers as part of Formula 1’s global television feed.

In 2007 David published his autobiography It Is What It Is and in 2018 his second book The  Winning Formula made the Sunday Times Best Seller List in the UK. In 2010 he was appointed a  Member of the Order of the British Empire (MBE).