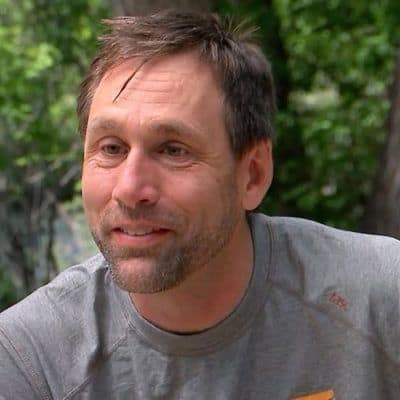 Erik Weihenmayer is one of the most sought-after keynote speakers in the world. Despite losing his vision at age 14, he is an accomplished climber, paraglider, skier, and kayaker who never allows blindness interfere with his passion for pursuing an exhilarating and fulfilling life.

"Your impact at Google has been significant. Your message on climbing with people that want to get to the top together caused me to re-organize my team at Google. So everyone is angry with you. Just kidding, they are in a much better place and as a team we accomplished a lot more than we thought we could."

"As always, Erik was awesome and the audience was truly inspired/motivated by his message. I know for me personally, Erik's words and deeds cause me to reflect on my life and the 'summits' I should be aspiring to reach. We're lucky to have had the chance to spend some time with Erik.."

Erik is best known as the blind man who climbed Mt. Everest and was a Time Magazine cover story. His high visibility, in this country and abroad, stems from:

His documentary Blindsight tells of his climb with 6 blind Tibetan teenagers. These youngsters were tied to beds and sold into slavery, spat upon and because of their blindness thought to be possessed by evil spirits, until they were rescued by a blind German adventurer and educator, who founded a school for the blind in Lhasa, Tibet. Her school followed Erik on the internet as he made his ascent up Everest. A year later she invited him to visit.

The resulting climb is the focus of the film. Young people, who were once afforded no opportunity in life, who were spurned by their villages and even their parents, are now educated in 3 languages, operate computers, have a vocation. Inspiring heroes, they are making their marks on Tibetan life. Blindsight was shortlisted for an Academy Award nomination for Best Documentary Feature.

Erik considers his biggest achievement to be the co-founding of the non-profit No Barriers, which has grown rapidly to impact on 6000 challenged people annually injured soldiers and veterans, families of the fallen, paraplegics and amputees, deaf and blind, those struggling with MS and cerebral palsy, and young people with limited experiences such as those in the inner city.

Erik’s first book, Touch the Top of the World, is about his life struggle through blindness to the world’s highest peaks. It is published in 12 languages, was featured in the National Book Festival of the First Lady, and was made into a feature film.

His second book, The Adversity Advantage, deals with the use of adversity as the fuel which can power your life and help you accomplish your dreams. Erik’s essential message: “Inside each of us is something I can only describe as a light, which has the capacity to feed on adversity, to consume it like fuel. By tapping into that light, every frustration, every setback, every obstacle becomes a source to power our lives forward.

The greater the challenge, the brighter the light burns. Through it, we become more focused, more creative, more driven, and can even learn to transcend our own perceived limitations to bring our lives more purpose and power.” The late Stephen Covey, author of Seven Habits of Highly Effective People, wrote in the foreword: “I found that reading The Adversity Advantage led me to look at how my life challenges can be the very fuel that will enable me to swim against the stream, against cultural currents, against all forms of adversity inherent in my most important goals.”

Erik’s third book, No Barriers, was released in 2017 to critical acclaim. A Book List review stated, “How do you top the challenge of climbing Mt. Everest, let alone the Seven Summits. Here he describes how he took on the daunting challenge of kayaking the Grand Canyon, chronicling a gruelling journey navigating eddies and rapids while paying homage to the complexity of families and bonds of friendship forged through shared experiences. More than a story about a blind man converting the improbable to the possible, this volume provides a powerful testament to the human spirit. Guaranteed to inspire.”

Erik is one of the more prominent speakers in the U.S. and internationally. Many of the biggest companies have hired him once and then hired him again and again, to include Intel, Microsoft, Google, Apple, Cisco, Hewlett Packard, IBM, Wells Fargo, CoBank, JPMorgan Chase, BDO, Accenture, PWC, Philips, Pfizer, Merck, Abbott, Amgen, Frito Lay, Johnson and Johnson, Walmart, Coke, American Airlines, Toro, Pepsi, Procter and Gamble, General Mills, GE, AT and T, IHG, Cox Enterprises and many more.

Erik participated in the APEC Summit in Santiago, where he was on the same program as the U.S. President and seven other Heads of State. He speaks regularly overseas -Hong Kong, Beijing, Bangkok, Sydney, London, Moscow, Geneva, Berlin, Warsaw, Prague, Istanbul, Venice, Rome, Lisbon, Madrid, Dubai.

Here is a testimonial delivered by the president of a financial services firm to an audience of 500 business leaders in New York City:

“We attract some extraordinary speakers to present at an Executive Roundtable we hold each year for around 30 CEOs, founders and senior executives of the world’s leading asset management firms, with $10 trillion under management. This year we engaged Secretary Colin Powell. Over the years we have hosted more than a dozen political leaders (such as British Prime Minister John Major), military leaders (such as General Norman Schwarzkopf), and sports leaders (such as Duke Basketball “Coach K”, Mike Krzyzewski). Yet among all of these outstanding speakers, none has been as impactful as Erik Weihenmayer has proven to be with our senior management and clients.”

Last year at the Mega Meeting of a huge healthcare company, Erik was regarded as their best speaker ever (4.96 of 5.00/ 2000 attendees). One of the organizers said after the event, “Hearing Erik was worth every minute and every dollar we spent for him to be here. He was the most relevant and truly inspirational speaker I have had the privilege to listen to.”

Erik appears in the first episode of Welcome to Earth, along with volcanologist Jeff Johnson. Eric and Jeff take Will Smith on an enthralling journey to Mount Yasur, a volcano sitting on Tanna Island, Vanuatu. Erik explains that the locals worship a mountain god called Yasur. While it may be a far-fetched concept to some, Erik’s description of what it’s like to be at the edge of the volcano (aka the mountain) does seem otherworldly.

Erik inspires audiences to have the vision to dream big; the courage to reach for near impossible goals; and the grit, determination, and ingenuity to transform our lives into “something miraculous.” Erik’s daring adventures have shattered the perceptions of people all over the world about what is possible in our lifetimes. “Often,” he says, “we are forced to throw out the expectations of others and rise to the level of our own internal potential.”

He emphasizes the importance of having a vision. “A vision is deeper than a goal, more complex. It’s where all your goals spring from. It’s how we see ourselves living our lives, serving other people; and what kind of legacy we want to leave behind.”

Leadership - Guess Who Is A Better Climber In The Dark?

There are times for each of us when we know we’re the best person to take “the sharp end of the rope” (the lead, in rock climbing parlance). He tells about the time he and his partner, a much better climber, were caught on a dangerous rock face at nightfall, without working headlamps. He knew he was the “best man for the job” of leading them down the mountain in the dark. A leader isn’t always the strongest or the fastest, but the person with the vision – and the courage to act.

Erik speaks with authority on the subject of teamwork, since often the key to his endeavors has been his superb ability to combine his strengths and talents with those of people around him. “Imagine everyone connected by a giant rope, helping each other, compensating for individual weaknesses, using everyone’s abilities to the fullest. We’d be an unstoppable force.”

While there are some things he cannot do on a climb, Erik refuses to be the token blind guy. In fact, he works hard to pull at least his share of the weight, wanting his own contributions to far outweigh any accommodations made for him.

Diversity – Team Up With Differences

Erik inspires audiences to make our differences a source of strength. His daring adventures have shattered the perceptions of people all over the world about what is possible in our lifetimes.

He has learned that by embracing our own uniqueness as well as the diversity of others, we can tap into the hidden potential which lies in all of us. He tells about scaling Utah’s famous Fisher Tower, a spiral rock formation, with a paraplegic and a double leg amputee as his team members. None of the climbers could have made the ascent individually; but, using their differences as strengths, they finally stood on the top, together and triumphant.

Erik’s many dramatic successes have not come without his share of failures. Since Erik sets tough goals for himself (most of his adventures have never even been attempted by another blind person), he knows he will fail as often as he succeeds… at first, but he’s learned a critical lesson: that failure is simply a part of success. “Success is not just the crowning moment, the spiking of the ball in the end zone or the raising of the flag on the summit.

It is the whole process of reaching for a goal and, sometimes, it begins with failure.” When Erik does fail, he says it rarely is the result of his lack of ability; but is more likely because he just hasn’t quite figured out the “system” which will work for him. Too often, he says, we are paralyzed by fear, so we play it safe … and never reach out.

Someone once told Erik he needed to recognize his limitations, but he’s found it much more fun to realize his potential. At 16, he climbed his first rock face. Sitting on the ledge well above the treeline, he could feel the texture of the rocks under his hands and the warm sun on his face -and the sense of openness all around him. And it was then that he knew he would never drive a car in the Indy 500 or catch a ball in the World Series — but he could climb mountains.

He had found his “bliss.””Follow your bliss. Follow it down dead-end alleys to dramatic blunders, follow it to unseen places and to people who are different from us, follow it beyond people’s expectations of us and even beyond our own …. because, if we are true to our bliss, it will lead us to a lifetime of great adventure and happiness.”