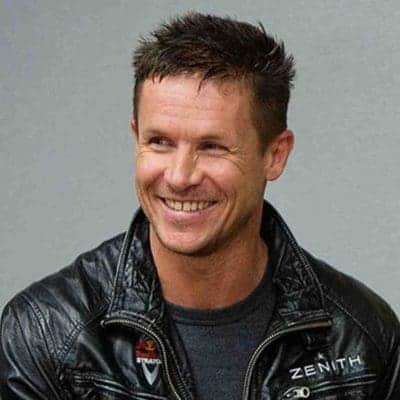 Felix Baumgartner is the world famous skydiver who rose to global fame and was watched by millions live in 2012 as he jumped from space 39 kilometres above earth.

"Amazing! Love him and his talk! Great guy!"

"Felix was brilliant, he worked extremely well with the moderator. Everybody loved Felix and his awesome ventures."

Born in Salzburg, Austria, in 1969, Felix began skydiving at the age of 16 and extended his skills as part of the Austrian military’s demonstration and competition team. In 1988, he began performing skydiving exhibitions for Red bull. The company’s out-of-the-box thinking and Felix’s adventurous spirit clicked and they’ve collaborated ever since, becoming today the world’s most known Red bull athlete.

By the 1990’s, Felix felt that he’d gone as far as he could with traditional skydiving, so he extended his canopy skills with BASE jumping – parachuting from a fixed object or landform – one of the most extreme and dangerous sports. He finds that the lightning-fast reflexes and precise techniques required by such low-altitude feats also enhance his high-altitude skydiving technique.

Felix has made 14 world records with his BASE jumps all over the planet, being a pioneer who has opened the path for all the skydivers around the world, for whom he is a great inspiration. Besides BASE jumps, he was the first person in the world to cross the English Channel with a carbon fiber wing, the first to compete flying next to a plane… and the list of his daring and dangerous activities remains open…

With the Red Bull STRATOS project, on October, 14th, 2012, Felix reached the ultimate goal, becoming the first human being to break the speed of sound in freefall, jumping from stratosphere – his outstanding achievement also provided important scientific data which hasn’t been available ever before, contributing to the “ NASA’s emergency escape from space project”.

After the huge success of the STRATOS jump, Felix has gone around the world spreading the news and excitement of his record breaking supersonic freefall. He was invited to all the main TV shows around the world, from the USA (Jay Leno etc), to Australia, Asia and Europe. He is constantly invited as a global speaker who can inspire people on achieving their goals, he frequently receives awards not only for specific performances, but for his entire career (from Laureus Award, to Bambi Millennium, Guy Choice Award in Hollywood, NEA Extreme Sports Awards, Steiger Awards, National Geographic’s Adventurer of the year, CNN’s Man of the Year and many more.

His second big dream was to become a helicopter pilot. Starting almost 10 years ago, Felix has been flying as a commercial helicopter pilot in Europe, after gaining his license in the USA. He uses his ability to fly a variety of craft to do extreme, charity and rescue flights.

Felix is a prominent advocate for non profit Wings For Life Spinal Cord Research Foundation and he is currently developing his own personal humanitarian project, FLY 4 LIFE.

He also takes very seriously another big passion, race car driving – he has participated in some famous races for example, Nurgburgring to Bathurst 24 hours race, in Australia and many more.

One thing is for sure – nobody can keep Felix away from the sky and from pushing his limits as far as he wants. No wonder he was named the DAREDEVIL or… the FEARLESS Felix!

How Much Risk is Enough?