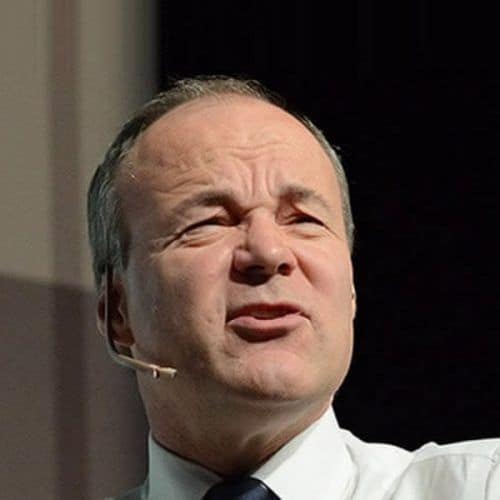 Highly successful and innovative business leader specializing in the transfer of ideas from one sector to another and turning around ailing companies.

"In terms of the quality and profile of companies worked for, jobs done, education and achievement, Hamish Taylor... takes some beating."

"One of the best presentations I have ever seen, let alone had the good fortune to Chair"

"Hamish shared some wonderful insights using great real life stories which resonated with the full audience group. Even 2 weeks after the conference, individuals in attendance are still speaking about and referring to his content and applying it to their own daily behaviour and work... would recommend him without hesitation to other companies."

Hamish began his working life at Procter and Gamble, where he was given the job of looking after a toilet cleaner – he describes it as world class training. After a few years he took the bold step of leaving to become a management consultant with PriceWaterhouse where from 1990 to 1993 he specialised in marketing effectiveness. He then took a position as head of brand management at British Airways.

It was here that he began to develop his trademark ability to innovate by taking ideas from other sectors. He brought flat beds to BA long haul flights by asking a yacht designer for ideas. Since then he has looked to Disney for expertise on how to deal with queues and has earned the sobriquet The master thief.

His next move took him to Eurostar where he went on to became chief executive. At the time the company was suffering major losses and he turned the brand around by focusing on selling the glamour and fun of a trip to Paris. His next move involved another leap into a new and innovative area supermarket banking. By behaving more like a retailer he was able to bring about significant growth as chief executive of Sainsburys Bank.

Since then he has been CEO for the consultancy Vision UK which counts Time Warner, General Motors and Citibank as among its clients and in 2004 went on to found The Skills Exchange building on his ideas about pulling in skills from outside the immediate environment of an organisation.

During his career, over the last ten years, Hamish has worked with many high profile organisations including Microsoft, RBS, BAA, Camelot, Inland Revenue, Kimberly Clark, Post Office, Ernst and Young, Diageo and the Economist. His career choices stem from his love of being the outsider, importing fresh ideas and adding value by being different. He also believes all executives should spend time in the customers world and with the workforce on the shop floor.

As a speaker, his presentations are always energetic, humorous and inspirational and his unique storytelling outlines the four key challenges that he believes we all face when trying to drive collaboration required to inspire innovation and change in any organisation or department. He firmly believes that to successfully drive change the customer needs to be placed at the centre of all activity. Hamish has also famously said that “if you want a breakthrough, look outside your current environment”.

Lively, dynamic and enthusiastic, Hamish Taylor is skilled at communicating and sharing his valuable business ideas with his audience.

Born to Scottish parents in Zambia in 1960, Hamish Taylor went to school in Tunbridge Wells and later attended St Andrews University where he got an MA in Economics. He then departed for Atlanta Georgia to undertake an MBA at Emory University after winning 2 scholarships to study there. He was notable at University for his glittering sporting success; he representing his universities in athletics, rugby and football. He graduated in 1984.

The Customer at the Core of your Activities

Bringing your brand to life

The application of statistics and decision analysis to industry, especially transport