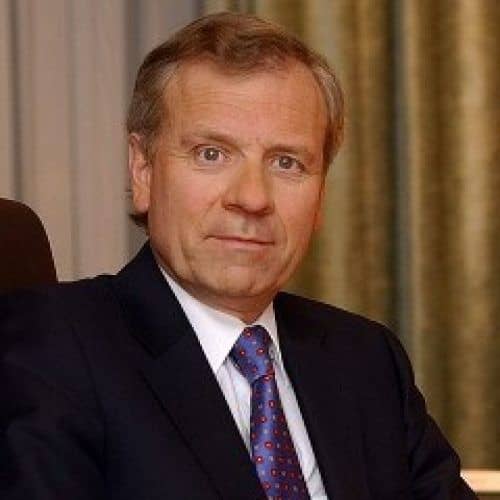 An experienced former politician who was the Secretary General of NATO between 2004 and 2009.

Jaap De Hoop Scheffer is a former Dutch politician who has occupied the role of Dutch Foreign Minister and has been Secretary General of NATO.

Jaap is known for his diplomatic but honest way of speaking. He does not let emotion cloud his insight into his subjects and his years of experience make him a knowledgable speaker.

Jakob Gijsbert de Hoop Scheffer (often called Jaap de Hoop Scheffer) was born on the 3rd of April 1948 in Amsterdam. He studied at Leiden University, graduating in 1974, after which he joined the air force, eventually becoming a reserve officer.

After leaving the air force in 1976, De Hoop Scheffer began working for the Ministry of Foreign Affairs. He remained in the job for a decade, initially working in Ghana at the Dutch Embassy, before taking on a role at the North Atlantic Treaty Organization (NATO) in Brussels.

In 1997, De Hoop Scheffer became the party leader of the Christen-Democratisch Appl (CDA), a position he retired from in 2002, prior to the elections. The CDA (under the leadership of De Hoop Scheffers successor, Jan Peter Balkenende) went on to win the majority role in the new coalition government.

De Hoop Scheffer was appointed Chairman-in-Office of the Organization for Security and Co-operation in Europe in 2003.

In 2004, De Hoop Scheffer became the 11th NATO Secretary General. In this role, he was not afraid to say what he felt needed to be said, commenting on the security of oil lines and infrastructure, and encouraging Canada to continue to keep some of their forces in Afghanistan after their initial withdrawal date (2009).

De Hoop Scheffer remained the Secretary General of NATO until July 2009, when he suffered from a heart attack and required emergency surgery.

After making a full recovery, he was invited to take Leiden Universitys Pieter Kooijmans Chair for Peace, Law and Security.

De Hoop Scheffer has been awarded numerous accolades from countries throughout Europe in recognition of his work with NATO.

De Hoop Scheffer lives with his wife Jeannine; the couple have two daughters.