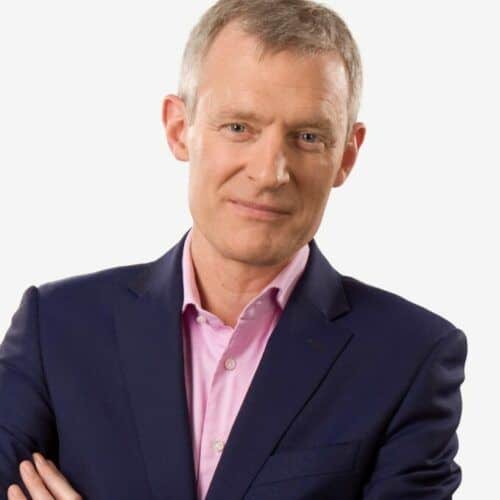 A top UK journalist and presenter, Jeremy Vine hosts a Radio 2 show and is an ‘Eggheads’ question master.

"Jeremy Vine was fantastic - funny, charming and an absolute professional. He was a delight to work and the Jeremy Vine/Mo Mowlam interview worked brilliantly. All in all, 10 out of 10. I don't see how it could have been better"

"Jeremy Vine was an excellent after dinner speech. It is rare that someone takes the trouble to research their audience so thoroughly and then tailor their speech to be so entertaining and relevant."

"Testimonials for It's All News to Me: A thought-provoking yet satisfyingly gossipy account of being a BBC lifer. I laughed out loud and winced at the same time as I recognised the moments of pride and exquisite humiliation that come with the job."

"Testimonials for It's All News to Me: Anecdotes, gossip and memorable moments with Paxman and Mandelson mark an account of 25 years at the BBC... This is an engaging, skillfully paced tome, full of heart and cracking anecdote. Going by this, Vine could afford to feel just a little bit smug."

"Core Net Global UK's Annual Summit was a great success, not least because of the excellence of our master of ceremonies. Please could you thank Jeremy Vine for his enthusiasm and professionalism and for keeping 140 guests enthralled throughout the day."

"Testimonials for It's All News to Me: Wry, self-knowing and sometimes delightfully acid, this is the ultimate insider's account of today's BBC. Jeremy Vine shows himself as good a writer as he is a broadcaster, but with more generosity of spirit than many of us. His best stories are often against himself and anyone interested in TV journalism will lap this up."

A former presenter of BBC 2’s ‘Newsnight’, Jeremy Vine now hosts his own Radio 2 lunch time show, interviewing guests, exploring news and views and introducing songs. An award-winning presenter who has previously reported from unstable areas of Africa and has worked as a political correspondent, Vine’s knowledge and calm demeanour have allowed him to get to the heart of the elections for the viewing public on numerous occasions, to become the host of the popular quiz show ‘Eggheads’ and to become a sought after speaker.

Sharing anecdotes from his time as a journalist and broadcaster, Vine keeps his audience engaged with his unique humour and with his relaxed yet in-depth approach. Able to involve audiences through question and answer sessions and an exceptional awards host, it is easy to see why Vine is becoming as popular on the speaking circuit as he is on the radio.

During his career, Vine has presented Newsnight, Panorama and the Today programme. He has worked as a political correspondent at Westminster and, as an Africa correspondent, has travelled through some of the continents most unstable regions. During his career he has travelled the world and has explored emotive and often divisive subject matter, at all times ensuring that he presents what he finds with honesty and integrity. His dedication to bringing the public the latest knowledge of current affairs and his honesty have proved to be the hallmarks of Vine’s career. He is currently the quizmaster of the much loved quiz Eggheads, a presenter of Points of View and hosts his own radio show.

The Jeremy Vine show on Radio 2 is broadcast every weekday between 12 and two in the afternoon. Popular with a wide range of lunch-time listeners, the shows includes news and discussion of current affairs, with both guests to the show and callers joining in the debate. Vine oversees all the discussion as a host and moderator, seamlessly linking the shows elements, as adept at introducing songs as he is at exploring complex political matters.

As a speaker, Vine utilises his wide range of experience to provide what his audience needs. Exploring important matters in journalism, international relations and politics, he is able to intrigue and educate with thought provoking material. Also an excellent awards host and moderator, Vine has worked with numerous clients in a variety of industries. Some of the events he has previously been invited to speak at include the UK Charity Times Awards, the Doctor of the Year Awards, the CIO Connect Conference and the NSPCC City Dinner. He recently hosted a public debate on the Promotion of Food to Children for the Food Standards Agency.