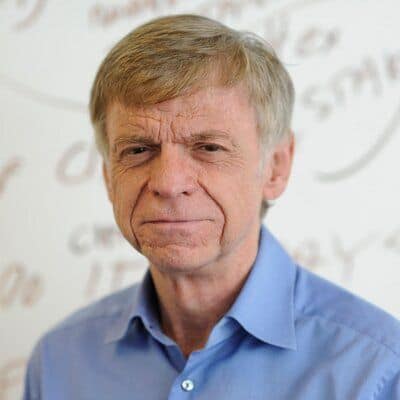 When John Kotter speaks, business leaders hear him. He forms an instant connection with managers which he puts down to the time he spends listening and talking to people in the field. 95% of what he does is story-led and he tells very convincing stories.

"Your talk was instrumental in helping me raise the leadership bar."

"Kotter International has helped us fundamentally change the way we do business. The results have been extraordinary."

Internationally known and widely regarded as the foremost speaker on the topics of leadership and change, Kotter is recognised to be the premier voice on how the best organizations “do” change and transformation.

He has authored 17 books on the subjects including 12 bestsellers. His books have been printed in more than 120 languages with sales exceeding two million copies. His international bestseller ‘Leading Change’ which outlined an actionable, 8-step process for implementing successful transformations became the change bible for managers around the world.

His articles in The Harvard Business Review over the past 20 years have also sold more reprints than any of the hundreds of distinguished authors who have written for that publication during the same time period.

In 2007 and again in 2009, Thinkers 50, the global ranking of management gurus, placed him among the list of most influential thinkers.

When Kotter speaks he has one and only one goal: to motivate action that gets better results.

In his presentations he uses humour, videotape, slides, case studies and theatrical flourish. Presenting to groups ranging from 10 to many thousands of participants, his most common audiences are senior executives. However, his material is also suitable for middle managers, staff or mixed groups. Regardless of the group size or make-up, feedback has always been consistently positive and enthusiastic.

When speaking, Kotter draws on the stories of recent successes and failures in the business world. He explores the new rules of leadership and the importance of lifelong learning in the post-corporate world and offers the tools necessary to achieve success in a business world that reinvents itself every day.

He also continues to speak at Harvard Business School Executive Education Programs, including the prestigious Advanced Management Program (AMP). These highly competitive professional seminars were created by Kotter to teach the important steps needed for successful leadership and change.

John Kotter was born in 1947. He took his BSc and MSc at the Massachusetts Institute of Technology (MIT) in Electrical Engineering and Computer Science followed by a Doctorate in Business Administration at the Harvard Business School. He joined the faculty in 1972 and became Professor in 1980 at the age of 33, one of the youngest people ever to do this. He lives in Cambridge, Massachusetts, and Ashland, New Hampshire, with his wife and children.

In 2007, his video “Succeeding in a Changing World” was named best video training product of the year by Training Media Review.

Leading Change was named the Number 1 management book of the year by Management General 1998 and one of “The 25 Most Influential Business Management Books” by “TIME Magazine” (TIME.com).

Kotter spent over 30 yrs at Harvard studying change before forming his own organization Kotter International which helps leading companies implement their change strategies. He believes that companies need to understand that the pace of change is not going to slow down and that they need to be agile and adaptable to make the most of turbulent times. He first outlined his 8 step plan for dealing with change in his best-selling book Leading Change in 1996 and developed it into an allegory about penguins in the book Our Iceberg is melting. Since then there has been The Heart of Change based on real life case studies. His latest work, Accelerate was published in the Harvard Business Review in November 2012 and proposes a radical solution for how organisations can develop the agility they need.

He has also written about leadership, culture and careers as well as a biography of the Japanese industrialist Konosuke Matsushita founder of Panasonic and known to many Japanese as “the god of management”. In total his books have sold over 3 million copies and have been printed in over 150 foreign language editions.

His academic articles in the Harvard Business Review have sold a million and a half copies and have been reprinted many times. His influence has been hailed by BusinessWeek, Fortune, The Financial Times and countless other publications around the world

Many organisations are over-managed and under-led because people do not know the difference between management and leadership. Kotter demonstrates that there are significant differences and that each have an effect, negative and positive, on a company’s performance. He will explain and motivate the vital importance of the right leadership needed for a company’s success.

Our Iceberg Is Melting

When change is needed, sometimes the hardest part is getting everyone to believe it. Kotter will introduce his eight steps for successful change in an easy to understand format. By providing the guidance needed in an ever-changing world, your audience will begin to see how dealing with the challenges of change can be compelling when presented in the right way.

Succeeding in a Changing World

As the economy and world change, so must organisations. The pressure to modify business structures will only increase in the years to come. Many times, a good plan can get lost in the midst of implementation. The methods used to restructure or reorganise often fail due to complacency, loss of traction, lack of leadership and other barriers. Let your audience learn how great companies succeed where others fail to achieve lasting change in today’s world.

A Sense of Urgency

Kotter focuses on the eight-step process of implementing successful transformation. Your audience will learn how companies achieve their goals and how important it is to have successful leadership in order to make change happen. With personal attention to a company’s efforts and failures, Kotter shows how to create lasting change as well as successful leaders.

The Heart of Change