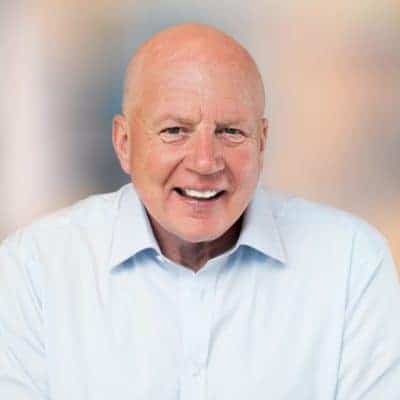 Kevin Roberts is the founder of Red Rose Consulting, a former executive Chairman of Saatchi & Saatchi, author, innovator and speaker. His career was built in sales, marketing and leadership roles in many high profile global brands including Mary Quant, Gillette, Procter & Gamble, Pepsi-Co and Saatchi & Saatchi. He is the author of several marketing and leadership publications including “64 Shots: Leadership in a Crazy World”.

"Kevin Roberts was arguably more entertaining and more informative than any other speaker, speaking about any other subject, anywhere. That is saying a lot, but during the hour of his speech, there was nowhere else in the world that I would have rather been than in his audience."

"You rocked the house! Thank you for being such a spectacular part of this year's WWD/DNR CEO Summit. The take away value of your presentation was exceptional and the inspiration powerful. Each executive in attendance was truly driven to reconsider the nature and DNA of their brands. I'd consider that a huge win."

Kevin’s career was built in sales, marketing, and leadership roles at Mary Quant, Gillette, Procter & Gamble, Pepsi-Co, Lion Nathan, Saatchi & Saatchi (17 years as CEO worldwide) and Publicis Groupe. Kevin has authored several books including 64 Shots: Leadership in a Crazy World (2016) and Lovemarks: The Future Beyond Brands (2004), published in 18 languages. Lovemarks was named one of the ten Ideas of the Decade by Advertising Age in 2009.

He is a former director of the New Zealand Rugby Union and former chairman of USA Rugby. He also served on the Board of New Zealand Football and as a Trustee for a Team New Zealand America’s Cup challenge.

Kevin is Honorary Professor in leadership, innovation, and creativity at universities in England, Canada, and New Zealand, and advises national organizations and global brands across commerce, media, and sport.

In 2013, Kevin, a New Zealand citizen, was made a Companion of the New Zealand Order of Merit (CNZM) for services to business and the community.

Lovemarks - An Idea That Reinvents Brands

Leadership in a Crazy World

Creative Leadership in the Age of Now

Turn Your Brand into a Lovemark