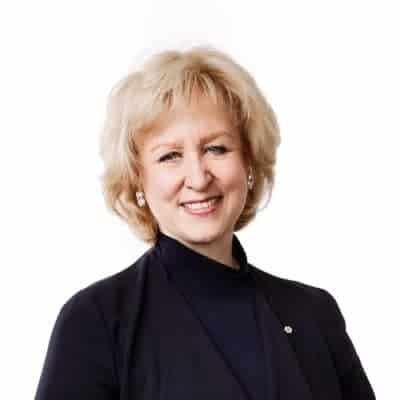 The first and only female prime minister of Canada

The Right Honourable Kim Campbell has spent her ground-breaking career shattering barriers for women, cultivating the next generation of leaders and speaking out on human rights and the impact of climate change.

"Kim was phenomenal! She really exceeded our expectations for an inspiring speaker. All our guests enjoyed her talk and felt motivated from her responses. The Q&A was very popular, with many women wanting to get their questions answered. During the poster signing, Kim was very personable and kindly took photos with guests. She also stayed for the lunch, and we could not have been happier that she did."

"Ms. Campbell's talk to the students and women leaders was exceptional. She hit all of the important points and the students were engaged and interested, and the adults in the room were all commenting about how wonderful her presentation was. She had obviously lived the topic and her comments and stories will resonate with us all for a very long time."

"Kim Campbell ... has the rare gift of presenting very complex issues in an accessible style without ever diminishing the power of the ideas and importance of the concepts she is presenting."

"Kim Campbell has a remarkable gift of clarity. She speaks with knowledge, passion and honesty on a wide array of complex issues-from global warming to international affairs-while keeping the very human impact of these larger themes front and center."

"Kim Campbell's stature as a global leader never overshadows her connection with an audience, regardless of the size. They always feel like they've been personally engaged and inspired."

As Canada’s first and only female Prime Minister, Kim Campbell’s life has been a life of firsts. From the age of 16 when she became the first female student body president of her high school, until 30 years later as the 19th Prime Minister of Canada.

Through her political career, during which she served at all three levels of Canadian government, Kim knows what it’s like to make it in a man’s world and is widely regarded as one of the foremost thinkers and speakers on gender issues and leadership. Considered a “leader of leaders,” she was elected Secretary General of the venerated Club of Madrid, the largest forum of former democratic presidents and prime ministers.

Before rising to her nation’s highest office in 1993, she was the first Canadian Prime Minister to have held office in all three levels of government: municipal, provincial and federal. She has held cabinet portfolios of Minister of State for Indian Affairs and Northern Development, Minister of Justice and Attorney General, Minister of National Defence—the first woman to hold the top defense position in any NATO country—and Minister of Veterans’ Affairs.

After her tenure as Prime Minister, Ms. Campbell continued to serve as a diplomat, Counsul General and as a Fellow, lecturer and faculty member at the Kennedy School of Government at Harvard, where remains an Honorary Fellow. From 2014-18, she was the Founding Principal of the Lougheed Leadership College at University of Alberta, creating a world class, interdisciplinary leadership program for undergraduate programs that is empowering change-makers. She currently serves as a Distinguished Senior Fellow at University of Toronto.

A member of Global Leadership for Climate Action, a task force of world leaders, she is a stalwart champion for the environment, making a strong business and economic case for sustainability. Straight-speaking, independent-minded and always thought-provoking, Ms. Campbell combines the stature and knowledge of a former head of state with an inspiring voice for women’s leadership and protecting our planet.

Holding audiences since the age of ten, Ms. Campbell speaks widely on issues related to leadership, international politics, democratization, climate change, gender and Canadian/American relations all over the world. In the first half of 2009 alone she addressed audiences in, Kiev, Cordoba, Toronto, Prague, Brussels, Vancouver, London, Beijing and Washington, DC among others.

Praised as a leader who “occupies a special place in the world of leadership, not only as a woman of many extraordinary firsts…,but as a woman who’s created a rich legacy of inspiration and expanded opportunities for girls and women across the globe,” former Prime Minister Campbell brings a deep understanding of the major issues of the day. Whether diving into trade, geopolitics, gender equity, Canadian/American relations or climate change, her keynotes inspire and illuminate. Most of all, they treat audiences to an encounter with one of the most extraordinary and accomplished women of our time.

As Canada’s first and only female Prime Minister, Kim Campbell’s life has been a life of firsts. From the age of 16 when she became the first female student body president of her high school, to becoming the 19th Prime Minister of Canada at the age of 46, Ms. Campbell has spent much of her life breaking barriers for women. Through her deep and lengthy political career, she has experienced what it takes to make it in a man’s world, and is widely regarded as one of the foremost thinkers and speakers on gender issues. After leaving politics, Campbell went on to teach at the Kennedy School of Government at Harvard University. Her course, Gender & Power, combined social science with her own career experiences.

The culture of power

Leadership, diversity, culture and the way we do business have all become intertwined. But what can science tell us about who gets to lead? Former Canadian Prime Minister Kim Campbell takes a close look at leadership in politics and business as it relates to the building blocks of our respective societies. Across the globe communities embrace different values in terms of legitimacy, loyalty, and social trust – but how have these been shaped and influenced by the level of development in our democratic systems? Known for her global vision and vast experience as a world leader, Campbell probes the question of cultural sensitivity as it applies to certain business and political ties and the factors that play a role in determining who is trusted as a leader.

Climate change has come to be recognized globally as one of the most serious challenges facing our planet. Former Canadian Prime Minister Kim Campbell discusses the impact of the physical changes of global warming on human societies. Prime Minister Campbell was invited to address the security implications of climate change at the World Bank’s first internal seminar on the social implications of climate change in 2006. She continues to explore the implications of what she calls ‘the trifecta of disadvantage’ where countries most at-risk from global warming are also among the world’s poorest economies and weakest states. Campbell helps explain the effects of climate change on people, and offers insight into the actions that will be necessary in order to save cultures, lifestyles and lives.

Creating the next generation of leaders

The Right Honourable Kim Campbell knows leadership. She demonstrated it as Canadian Prime Minister and during a respected career in which she was the first woman in many high-level leadership roles. As Founding Principal of the Peter Lougheed Leadership College at the University of Alberta, Campbell also created an interdisciplinary program to cultivate the next generation of leaders who are facing a world driven by intense competition, rapid technological change, and unprecedented leadership challenges. Drawing on her personal experience and latest studies, former Canadian Prime Minister Campbell explores aspects of effective leadership across sectors, and what it takes to develop creative, flexible, and innovative leaders in your organization.