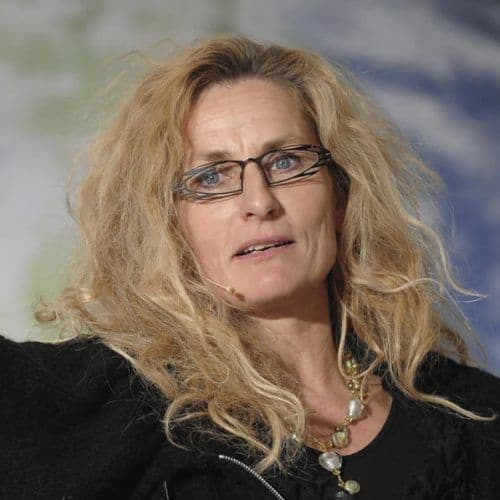 The first Scandinavian woman to conquer Everest, Lene Gammelgaard is now renowned as a motivational speaker who inspires others to achieve their goals.

Known as ‘the speaker who’s more than just talk’, Lene Gammelgaard climbed her way to fame on Mount Everest, becoming the 35th woman to reach the summit. As a speaker and coach, she has worked with numerous global organisations, helping individuals, teams and whole businesses reach their goals.

Lene Gammelgaard has learned to achieve her aspirations and has sought to help others to do the same. Catriona this sentence doesn’t make sense: how can you learn to achieve your aspirations? Focusing on strengthening mind-sets and preparing for challenges, she inspires others to realise success by discovering their own strength and internal motivation.

On the tenth of May 1996, Lene Gammelgaard reached the summit of Everest via the mountains Southeast Ridge. She was a member of the Sagamartha Environmental Expedition led by Scott Fischer, who tragically lost his life on the mountain. These experiences formed the basis for her popular book, Climbing High: A Woman’s Account of Surviving the Everest Tragedy, which was published in 1999 and has been translated into thirteen languages.

Perhaps surprisingly, her love of adventure did not start with mountaineering after completing her law degree, Lene decided to break from the life that was expected of her by travelling, first to the Caribbean. After working around boats and ships, Gammelgaard decided to pursue a dream which had once felt impossible along with six others, she crossed the Atlantic. During these times of self-discovery, she also worked with Greenpeace, making a stand for the things in which she believed. In doing so she learned that dreams are not impossible fantasies. They can be realised and can exceed even the greatest expectations. Devoting some of her time to art and to writing, Gammelgaard realised that she could use her inner strength in order to help others find and express theirs.

The loss of her brother when she was in her early twenties and the later loss of her friend Scott Fischer enabled her to see the importance of individuals realising their potential and not holding back. Life is short and we should make the best of all our opportunities. Bringing such ideas to her motivational speaking work, Gammelgaard really does prove inspirational, also helping listeners to build a foundation of inner resources to support their future success. She seeks to ask people whether they feel as if they have achieved their goals, or are on the path to do so, and if they died within 24 hours, would they be satisfied in their lifes work These difficult questions need to be faced in order to set about changing lives for the better.

Gammelgaard started Lene Gammelgaard Consult ApS in order to assist individuals and businesses to become future focused and to discover and utilise pre-existing strengths. Unlike most conventional human resources development companies, this one is designed to use shared experiences in natural settings in order to encourage individual progression and team bonding.

Gammelgaard discovered her passion for art at a young age and her life experiences have influenced her work. Both critics and art lovers have fallen in love with her uniquely emotional canvases, with their vibrant colours and stark contrasts. Today, she divides her time between painting in her studio and motivating others, following her ambition whilst helping others take the steps necessary to follow their own.

As well as running her business, pursuing art and writing, Gammelgaard is a firm supporter of the Sherpa Educational Fund in Nepal, which assists the children of deceased Sherpas with the cost of education.

As well as having written several books, Lene Gammelgaard often writes for leading German and Danish newspapers and magazines.

Get busy living or get busy dying

Mobilizing the fighting spirit in leaders and organizations

Will to victory - disciplining the choice to persevere

The power of a vision

From crises to success - Failure is no option

How to reach seemingly unreachable goals

It’s time to mobilize robust post-Covid strategies to ensure the sustainability of your business. Lene Gammelgaard is the first Scandinavian woman to summit Everest. Lene was a good friend of Scott Fischer and were in the storm in 1996, that killed several fellow climbers. Lene has invented THE EVEREST WAY – a 3 step method for all to accomplish what has never been possible before. Lene received EU BUSINESS AWARD as INNOVATOR of cutting-edge leadership strategies – driven by innovating SUSTAINABLE BUSINESS in turbulent times.