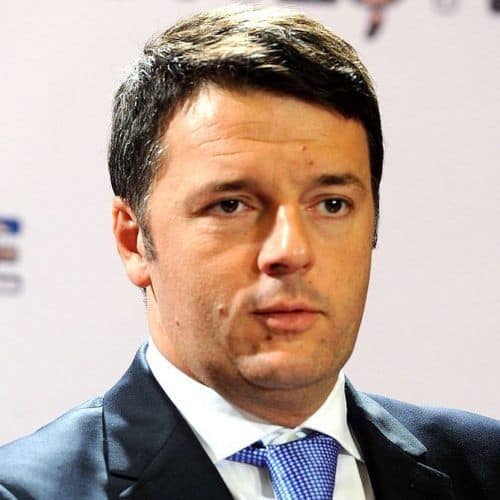 Matteo Renzi is the youngest person to serve as Italian Prime Minister and was the youngest leader in the G7. He was also the first serving Mayor to become Prime Minister. In 2014, the American magazine Fortune ranked Renzi as the third most influential person under 40 in the world, and Foreign Policy listed him as one of the Top 100 Global Thinkers.

Matteo Renzi was born in Florence in January 1975 and grew up in Rignano sull’Arno.

Since he was very young he has been living the scout experience, which he will carry with him the desire to play and “leave the world a little better than we found it” (Baden Powell).

This commitment also strongly marked the years of high school, the “Dante” of Florence, where Matteo became an institute representative. From university student of the Faculty of Law contributes to the birth of the “Committees for Prodi”: it is his first commitment in politics.

He works as a manager in the family business that deals with marketing services, while the scout commitment continues, as head of the R / S branch and as editor of the magazine “Camminiamo insieme”.

In September 1999 he married Agnes, a student of letters, now a teacher in Florentine high schools, and graduated in law with the thesis “Florence 1951-1956: the first experience of Giorgio La Pira Mayor of Florence”. He is the author with others of the book “Mode – Guide to street and moving styles” and of “But the red jackets did not kill Aldo Moro”, together with Lapo Pistelli.

In the meantime he is provincial secretary of the PPI and coordinator of La Margherita Fiorentina.

In 2004 he was elected President of the Province of Florence: during his mandate he reduced taxes in the Province, cut the costs of the Authority and increased investments in culture and the environment.

In 2008 he decides to get involved again: he rejects the proposal of the center-left to run for a second term as President of the Province and on September 29 announces his candidacy for the Democratic Party primaries for the race for Mayor of Florence, with the slogan “ Or change Florence or change jobs and get back to work ”. Defying the immobility of the political establishment wins, in general amazement, the primaries collecting 40.52% of the votes.

With a junta halved compared to the past and made up of half women and half men, Florence is the first Italian city to approve a ‘zero volume’ structural plan and to say stop to cement and land consumption. The pedestrianization of the historic center starts, the commitment to a greener city and a campaign against road deaths. In the following years he continued his work by increasing investments in school, social and culture.

2010 is the year of the “Next stop: Italy” convention, where the idea of ​​a possible, due, “scrapping” of a political class for decades now glued to the seats has started.

The following year it was the turn of “Big Bang: politicians, writers, entrepreneurs and hundreds of people take to the stage to express their idea about Italy’s change. And again “Italia Obiettivo Comune”, where a new model for Italy and a new model of Pd are planned among a thousand local administrators.

On September 13, 2012, Matteo Renzi announced his candidacy for the center-left primaries. In the meantime, the commitment continues with the city. The electoral campaign lasts three months: on a trip in a camper Matteo touches all the Italian provinces. On 2 December he lost the primaries in the ballot against Pier Luigi Bersani.

In 2013 he runs again for the primaries, this time of the Democratic Party, and on December 8 he wins the competition with 67.5% of the votes, becoming Party secretary and beating Gianni Cuperlo, Giuseppe Civati ​​and Gianni Pittella.

Since February 22, 2014, following the resignation of Enrico Letta after a very large majority vote by the Directorate of PD, he is President of the Council of Ministers of the Italian Republic, the youngest from the unification of Italy.

On April 30, 2017, almost two million people go to vote for the Democratic Party primaries. Matteo wins with 69% of the votes and he is reconfirmed national secretary.

He presents his book on a summer tour that touches on many festivals of the Unity. In autumn it closes the cycle of presentations and starts a great listening campaign with the PD Train, which ends in December.

In March 2018, after the political elections, he left the position of national secretary of the Democratic Party. He continued his political career as a senator, elected in the college of Florence, Scandicci, Signa, Lastra a Signa and Impruneta.