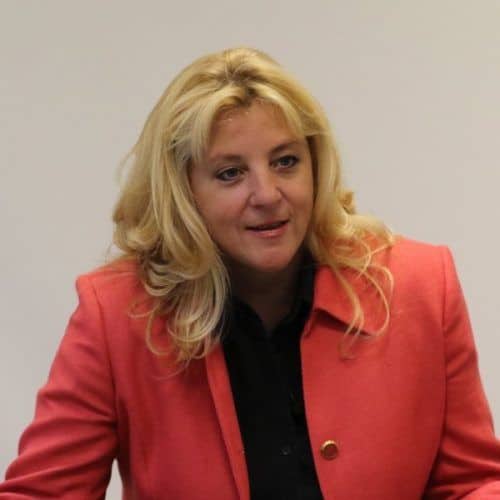 Maxine Hulme rose through the ranks of one of the most high-pressure working environments in the world, and in doing so was awarded the QPM for her services to policing.

"Maxine’s anecdotes and experience from her time at the Met are truly amazing, and she gave great insight to the practical issues confronting organisational change and cultural evolution. Highly recommended."

"Thank you very much for your inspiring and very thought-provoking session with Cabinet Office senior leaders today. Your practical and harrowing examples, your honesty and your practical recommendations re debriefs etc were excellent."

"Maxine speaks about change from years of experience. Her tacit knowledge on this subject comes through very clearly. I would recommend any organisation about to make great change to look up Maxine first."

An experienced advisor on transformational change, Maxine has led one of the most historically significant change programmes to the structure and delivery of the policing service across London; driving forward enhanced working practices through augmented technologies, reduction of management and bureaucracy and improved budget management.

Following the 2015 Paris terrorist attacks, Maxine spearheaded the largest counter terrorism exercise the UK has seen – a multi-site scenario with key partners, which saw her advising and liaising with the Government to ensure the Prime Minister and Cabinet were fully prepared and equipped to hold COBRA meetings during the two day event.

As part of Specialist Crime Directorate, Maxine worked on the Kidnap Unit, as well as the Arts and Antiquities and Cheque and Credit Card squads. She has also led numerous high profile and sensitive cases involving the Royal Family, politicians, corporate blackmail and money laundering.

Maxine speaks with the authority of a wealth of experience and has delivered keynote speeches at numerous high profile events, including those for the NHS, recruitment markets and throughout the Government and National Policing arenas.

Outside of the police, Maxine also serves as Chair of the Board of Governors for an Educational Charity Trust in Surrey, moving the trust from significant loss to surplus during her time there.

Maxine is a keen horsewoman, and has served as the Deputy Assistant Commissioner (Chief Officer mounted) at the Queen’s Trooping the Colour.

She lives in Surrey with her family.

The current climate has meant a change for us all, when not speaking Maxine has been working with organisations big and small – guiding them on their transformation journeys including developing workplace strategies, transforming work spaces while increasing productivity and adapting to the everchanging environment to meet future needs.

From her experience working with organisations during  the Covid pandemic she has developed this supplementary speech. In this session she will help the audience to:

Audiences will leave with the determination that anything is possible event during a crisis, courage to operate outside of their comfort zone, an understanding of how to approach the transformation journey and inspiration and optimism to make transformation a reality.