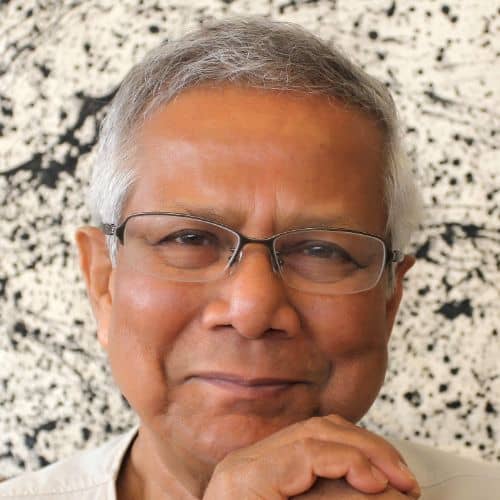 Visionary, Nobel Laureate, internationally recognized for his work in poverty

The visionary who pioneered the use of micro-finance as a means to help the poor, Muhammad Yunus was awarded the Nobel Peace Prize in 2006.

"Muhammad proved that the poor are credit worthy and that a micro-finance effort can be self-sustainable, create growth and spread peace Because of his efforts, millions of people, most of them women, have had the chance to improve their lives and we are all better off as a result."

"Testimonial for Building Social Business: Giving poor people the resources to help themselves, Dr.Yunus has offered these individuals something more valuable than a plate of food, namely security in its basic form.... Dr.Yunus has invoked a new basis for capitalism whereby social business has the potential to change the failed promise of free market enterprise."

"For most of my adult life, I have been an advocate for women and children and families both here in the United States and around the world. Way back in the early 1980s, I read about a man named Muhammad Yunus, and called him up and asked him to come to Arkansas. And we created a micro enterprise project, the first in the United States modelled on the Grameen Bank."

"Testimonial for Building Social Business: Social business is about joy says Yunus. Indeed, and the book itself is joy to read. In modest prose, Yunus tells of undertakings that instil hope. He also gives a lot of ideas, along with nuts-and-bolts practical advice for people who are ready to take the plunge into the world of social business. In the years to come, it seems certain that social business will become an integral part of our economic structure and will positively change the lives of many people."

It was when he began working as a professor of economics that he realised that much of what he taught did not help the poor. He defied convention and founded Grameen Bank in 1983 based on micro-lending, a bank which has helped the most impoverished people in his native Bangladesh and which has been emulated in countries all over the world. His dedication to helping the poor and promoting the rights of women have seen Yunus win the Nobel Peace Prize and become an internationally renowned authority on human rights.

Initially set up in Bangladesh, the bank’s aim was to turn conventional practice on its head providing small loans only to those in real need of them, thus providing the means for the poorest people to escape from poverty. Micro-lending is now carried out by similar banks around the world, lending money on terms which enable those who take them out to repay them and to succeed.

The concept of micro-lending (or micro-credit) initially occurred to Yunus whilst he was working as a professor of economics at Bangladesh’s Chittagong University. At this time, in the 1970s, poverty and famine were rife and the fact that hard-working people were unable to raise themselves out of poverty as they were not eligible for loans of any kind disturbed Yunus. He felt that loans should be provided to those who needed them, with suitable repayment terms. He began providing micro-loans and soon found that it had the desired effect helping poor people to succeed, leading him to found Grameen Bank. Today, 96% of the banks customers are women as they often have more difficulty obtaining loans from ordinary banks, but are welcomed due to Grameens policy of helping those in need.

Over the years the micro-credit system has proved doubters wrong as approximately 98% of loans are repaid, the highest rate among banking systems. Yunus has been outspoken about his dedication to helping women and has previously been a member of the Global Commission of Women’s Health and has served on the advisory boards of the United Nations Expert Group on Women and Finance and the Fourth World Conference on Women. 90% of the shares in Grameen Bank are owned by the impoverished people that it serves (the government own the remaining 10%).

His work with Grameen Bank and with his numerous other companies has led to Yunus being awarded some of the highest humanitarian accolades in the world and he is a sought after professor, speaker and human rights expert.

Muhammad Yunus was born in Bangladesh and attended Dhaka University, where he was awarded a Fulbright scholarship. He went on to study Economics at Vanderbilt University in Nashville, Tennessee, achieving his Ph.D. in 1969 before returning to Bangladesh and working as a Professor of Economics.

He is a board member for numerous national and international organisations and has been awarded Honorary Doctorates by universities throughout the world.

Passionate, knowledgeable and experienced, Muhammad Yunus is determined to educate others and to inspire corporations, organisations, governments and individuals to assist those in dire need.