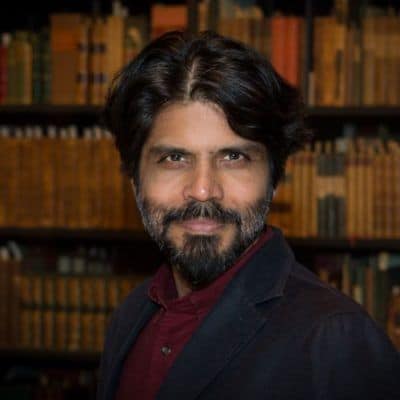 Pankaj Mishra was born in North India in 1969. He graduated with a Bachelor of Commerce from the Allahabad University before completing his MA in English Literature at the Jawaharlal Nehru University in New Delhi.

"Urgently vigorous....It is Age of Anger's singular ambition to give the world as have it a past, a how-we-got-here, a where-the-mistakes-lie...The book marks an important advance in our most urgent discourse."

"Pankaj Mishra has named a moment and an era...Brilliant...Fiercely literate and eloquent...Mishra's overview [is] amazingly capacious, considering the book's relative brevity."

"Bracing and illuminating...Mishra writes with...style, energy and incision...[He] dwells in the realm of ideas and emotions, which get short shrift in most accounts of global politics...A decent liberalism would read sharp critics like Mishra and learn."

"Impressive...Our current situation is recapitulating some of the most violent and dangerous episodes in modern history....With powerful and worrisome insights, Pankaj Mishra has clarified our present."

"Along with quotations from Voltaire, Rousseau, and other familiar figures of Western Civ, Age of Anger includes observations from Iranian, Chinese, Indian, Japanese, and other nations' scholars; their perspectives complement Mishra's deep understanding of global tensions....In probing for the wellspring of today's anger he hits on something real"

"A bowel-churning kick in the guts . . . [Pankaj Mishra's] vision is unusually broad, accommodating and resistant to categorisation. It is the kind of vision the world needs right now . . . Age of Anger is vitally germane to the global expressions of discontent that we are now witnessing"

"We all now live in this age of anger, and many-including much of the political and media class-have treated it like a strange new phenomenon, driven by the mostly white, working-class voters ('the forgotten men,' as Trump calls them) who put a fearmonger in the Oval Office. In his erudite new book, Mishra argues that our current rage has deep historical roots."

"A rangy, brilliant, penetrating analysis of the long run-up to the age we are now in....intellectual history to the third power...In this strong, nuanced, wise book, Pankaj Mishra has transmuted anger into understanding."

"Beautifully written....If the rise of nationalism around the globe has your head spinning, pick up Pankaj Mishra's profound and compelling book Age of Anger, which take a tour of the disenfranchised malcontents left behind by globalization to show how the current period of turmoil is anything but unique"

"What astonishes is Mishra's mastery of both Western and Eastern sources....Age of Anger will likely stand as the most comprehensive analysis of those whom the Russian writer Alexander Herzen called 'uninvited guests at the feast of life' - those who are reshaping history with spasmodic blows of the hammer."

In 1992, he moved to Mashobra, a Himalayan village, where he began to contribute literary essays and reviews to The Indian Review of Books, The India Magazine and the newspaper The Pioneer.

His first book was Butter Chicken in Ludhiana: Travels in Small Town India (1995), a travelogue which described the social and cultural changes in India in the new context of globalization. His novel The Romantics (2000) an ironic tale of people longing for fulfillment in cultures other than their own, won the Los Angles Times’ Art Seidenbaum award for first fiction. His book An End to Suffering: The Buddha in the World (2004), mixes memoir, history and philosophy while attempting to explore the Buddha’s relevance to contemporary times. Temptations of the West: How to be Modern in India, Pakistan and Beyond, describes Mishra’s travels through Kashmir, Bollywood, Afghanistan, Tibet, Nepal and other parts of South and Central Asia. Like his previous books, it was featured in the New York Times‘ 100 Best Books of the Year.

Published in 2012 From the Ruins of Empire: The Revolt Against the West and the Remaking of Asia was shortlisted for the Lionel Gelber prize in Canada, the Orwell Prize in the U.K and the Asia Society Bernard Schwartz Book Award in the United States. It won the Crossword Award for Best Nonfiction in 2013. In 2014, it became the first book by a non-Western writer to win Germany’s prestigious Leipzig Book Award for European Understanding. In 2013, he published A Great Clamour: Encounters with China and its Neighbours. In 2017, he publish Age of Anger: A History of the Present.

In 2005, Mishra published an anthology of writing on India titled India in Mind (Vintage). His writings have been anthologized in The Vintage Book of Modern Indian Literature (2004), The Granta Book of India (2005), Away: The Indian Writer as Expatriate (2003), The Picador Book of Journeys (2000), A History of Indian Literature in English (2003), The Best American Travel Writing (2008) and The Occupy Handbook (2012), among other titles. He has introduced new editions of Rudyard Kipling’s Kim (Modern Library), E. M. Forster’s A Passage to India (Penguin Classics), J. G. Farrell’s The Siege of Krishnapur (NYRB Classics), Gandhi’s The Story of My Experiments with Truth (Penguin), R. K. Narayan’s The Ramayana (Penguin Classics), Waguih Ghali’s Beer in the Snooker Club (Vintage) and Ahmet Hamdi Tanpinar’s The Time Regulation Institute (Penguin Classics). He has also introduced two volumes of V.S. Naipaul’s essays, The Writer and the World and Literary Occasions.

Mishra writes literary and political essays for the New York Times, the New York Review of Books, The Guardian, the New Yorker, London Review of Books, Bloomberg View, among other American, British and Indian publications. His work has also appeared in Times Literary Supplement, Financial Times, Wall Street Journal, New Republic, Washington Post, Boston Globe, Time, The Independent, Granta, The Nation, n+1, Poetry, Common Knowledge, Outlook and Harper’s. He was a visiting professor at Wellesley College in 2001, 2004 and 2006. In 2004-2005 he received a fellowship at the Cullman Center for Writers and Scholars, New York Public Library. For 2007-08, he was the Visiting Fellow at the Department of English, University College, London. In 2009, he was nominated a Fellow of the Royal Society of Literature. In 2014, he received Yale University’s Windham-Campbell Literature Prize.